Ferrovial under pressure in Gatwick sale

Shares in Spanish construction giant, Ferrovial, slumped 8.5% on 17-Nov-08 amid broad equity market weakness in Europe and concerns over the sale of Gatwick Airport by its BAA unit.

Regulatory issues also cloud the sale. The British High Court has approved an application by easyJet for a judicial review of the regulatory process that led to higher airport charges at Gatwick last Spring.

Investors may also be concerned about the thinning ranks of potential buyers. Vinci has confirmed it is not interested in bidding for Gatwick, while Macquarie and several other potential investors have also gone into their shells lately.

European airport shares were weak yesterday, with Zurich Airport and AdP both dropping 4.6%. On the other hand, Copenhagen Airports' shares continued to bounce back from last week's heavy sell-off. 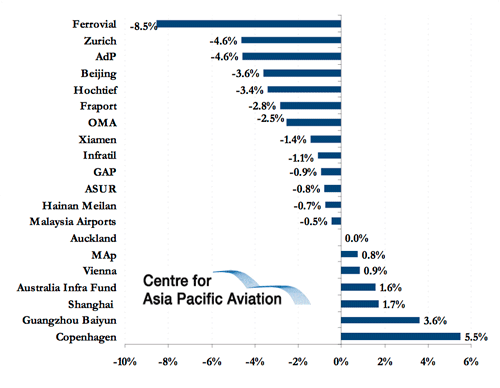