Ferrovial to “continue to tap the markets”, shares dip

Ferrovial SA Chairman, Rafael del Pino, announced yesterday the company plans to “continue to tap the markets” to finance operations, if they are as “liquid as they are now” before a decision to sell more airports.

The BAA parent is still awaiting on the UK Civil Aviation Authority’s judgment on whether BAA will be forced to sell London Stansted and Glasgow or Edinburgh airports. Mr del Pino acknowledges the company will “eventually have to sell some BAA assets”, but “hopefully in better market conditions” than when BAA sold London Gatwick.

Also in Europe, Aeroports de Paris (ADP) announced plans to approve a four-year investment plan for 2010-2014, including the upgrade of Orly and Roissy airports, valued at EUR2.7 billion for ADP SA and EUR3.2 billion for ADP Groupe. ADP shares were up 0.2% yesterday. 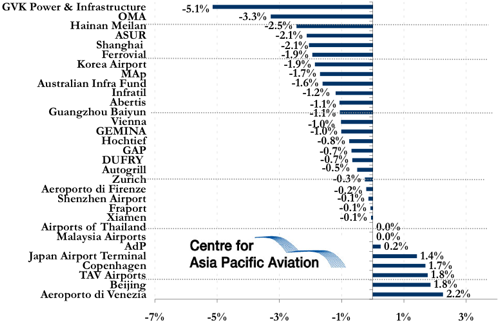