Shares in Ferrovial surged 9.7% yesterday to EUR6.50, gaining the most since 10-May-2010. While Ferrovial Airports is the division that integrates all of Ferrovial's airport operations and management activities, including BAA, it was the company’s other infrastructure investments that led to the strong gain.

Canada Pension Plan Investment Board offered EUR2.4 billion for toll-road operator, Intoll Group, for which the operator’s assets include a 30% stake in Ferrovial's 407 ETR highway in Toronto. Ferrovial is also selling a 10% stake in the 407 ETR highway.

Meanwhile, former BAA asset, London Gatwick Airport, reported a 0.8% reduction in passenger numbers in Jun-2010 to 3.0 million. However, cargo volumes were up 75.8% year-on-year, despite a 2.1% reduction in aircraft movements. 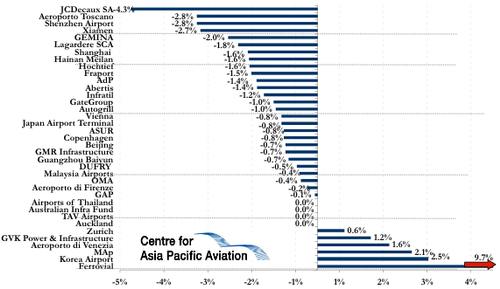