Meanwhile, Macquarie Airports (MAp) today announced it would seek to withdraw from its “strategic” investment in Japan Airport Terminal and expects to incur a loss on the transaction of around AUD20 million ((USD15.6 million). MAp also disclosed it is cutting its dividend by 22% this year to AUD0.21 per share (including the AUD0.13 interim dividend) from a previously forecast AUD0.27 per share. MAp stated the new distribution forecast reflected an expected loss of earnings from JAT and its “expected sustainable earnings this year”.

MAp shares closed up 2.5% yesterday, while JAT fell 0.8%. MAp shares have risen as much as 2.7% in early trade in Sydney today. 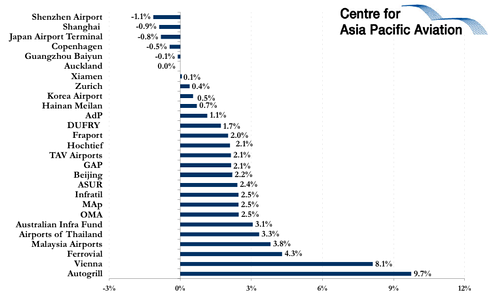