In Europe, Spanish Ferrovial, an investor in UK’s BAA, surged 6.0%. During trade, Ferrovial proposed that the Shareholders' Ordinary Meeting approve a dividend of EUR0.30 per share out of reserves, in addition to the EUR0.10 interim dividend paid in Dec-2009. This dividend will be payable on 01-Jul-2010. This decision is a continuation of Ferrovial's standard shareholder remuneration policy, supported by the reduction of debt, the performance by the infrastructure group's services, toll roads, construction and airports businesses, and its strategy of rotating mature assets and investing in profitable new projects.

Meanwhile, ACI World Director General, Angela Gittens, stated the European ash crisis highlighted the need for better understanding of the key parameters of airport business management and greater stakeholder collaboration to ensure a sustainable future for the airport sector. ACI, representing airports worldwide, will participate in the establishment of a special Volcanic Ash Task Force formed by ICAO, to examine scientific issues and seek an international approach to the closure of airspace. 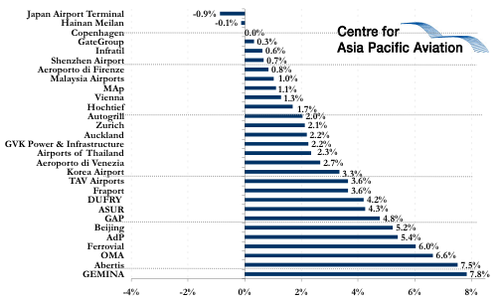