FedEx: Summer manufacturing activity to be "substantially negative", with growing concern over fuel

As valuable forward indicators of business activity, the small package and printing operations of FedEx are usually reliable, so the fact that results were worse than analysts expected did nothing to excite a cautious market this week. FedEx stock had been sinking in recent days, apparently in anticipation of a weak result. It has fallen nearly a fifth in value since reaching its recent peak in early May-2009 - and most of that loss occurred in the past week.

Competitor UPS stock has tracked very similarly over this period too. 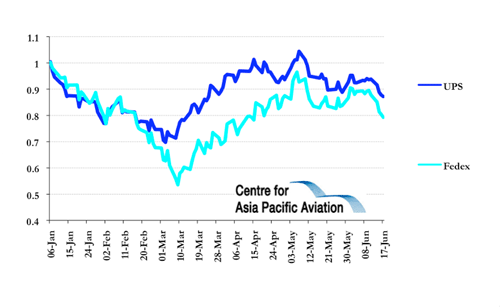 Reporting traffic results for the company's fourth quarter, to 31-May-09, EVP and CFO, Alan Graf Jr, noted that "the operating environment for our first two quarters in fiscal 2010 (that is, to end Nov-2009) is expected to be extremely difficult. Manufacturing activity is expected to be substantially negative year over year through the summer and last year's first quarter results benefited from stronger economic activity, making earnings comparisons difficult."

Meanwhile President and CEO, Fred Smith, tried hard to interpret the forward scenario positively, seeing some "signs of stability" and believing that "the worst of the recession is likely behind us".

However, even if the economy has ceased falling, Mr Smith observed no clarity on "how long this bottoming out process will take" and, moreover, "how strong the recovery will be remains of course uncertain."

He hoped that a turnaround "later in calendar 2009" (in view of his CFO's comments, unlikely to be before Dec-2009) was possible. But, he stressed, this will depend entirely on how businesses see the outlook: "corporate caution in managing inventory and spending could be a limiting factor and push it out a little bit later."

This is hardly an enthusiastic endorsement of the green shoots theory, but is certainly consistent with the general desire to put as positive a spin as possible on where we stand at present and where we are likely to be next year.

Given this uncertainty - and the growing concern over higher fuel prices - the CFO was unable to "provide a meaningful annual earnings forecast", but he did say he expected "year over year GDP growth to turn positive in the first calendar quarter of calendar 2010".

In the discussions about the outlook, there was no mention of the legislation currently before Congress concerning likely unionisation of the company's employees, currently non-unionised under a historical legislative loophole.