North and South American airline shares were mixed on Thursday (18-Mar-2010), with the AMEX Airline Index (-0.2%) slipping, despite a drop in oil prices (-0.9%), to USD82.20 and another wider market rally. The Dow (+0.4%) rose for an eighth consecutive day, pushed higher by Boeing shares, after Bernstein Research stated the aircraft manufacturer’s B787 program appears to be making “substantial progress”.

However, growth in the market was weakened by news the US Leading Economic Index increased 0.1% in Feb-2010, with the previous pick up in the LEI now appearing to be stabilising, as the economy moves from recovery into the early phases of an expansion. The LEI points to moderately improving economic conditions in the near term, with a "slow recovery this Summer" according to The Conference Board. Demand strength remains uncertain.

The freight carrier now expects to grow its revenue and earnings in 4Q2009-10 through increased demand for its "superior services", while yield management will continue to be a top priority across all operating companies. FedEx expects earnings per share of USD1.17 to USD1.37 per diluted share for 4Q2009-10, and USD3.60 to USD3.80 for FY2009-10, which it stated reflects the current market outlook for fuel prices and a continued modest recovery in the global economy. Previously, the company expected earnings per share of USD3.45 to USD3.75 for FY2009-10. The company reported a loss of USD2.82 per share in 4Q2008-09, which included USD3.46 per share of charges primarily related to the impairment of goodwill.

UPS (+2.5%) shares were boosted by the report, on optimism the freight market is now recovering.

LAN looking to Peru for shareholders

LAN Peru President, Emilio Rodriguez, stated during trading that LAN (+0.1%) wants to list shares on Lima's Stock Exchange and put up to 20% of all shares for sale to domestic investors. Mr Rodriguez stated LAN was keen to have more Peruvian investment in the carrier, from all kinds of investors.  However, he added that the plans have been affected by a new capital gains tax of 30% that Congress approved in Dec-2010.

Fellow South American carriers, GOL (-2.1%) and Copa Airlines (-1.9%) ended trading down. During trading, GOL announced the conclusion of the expansion work on its Aircraft Maintenance Center, located in Confins (Minas Gerais), where the company carries out heavy airframe maintenance, preventive maintenance, aircraft painting and the internal configuration of the GOL and VARIG combined fleet. 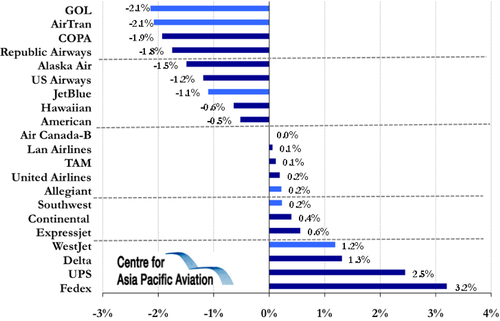