FedEx, Hawaiian and JetBlue up; US Airways falls on rise in oil prices

FedEx (+4.7%) stocks advanced on a day of mixed trading for North and South American airline stocks on Monday (29-Nov-2010). Credit Suisse Group AG raised its rating of the freight carrier’s stock from "neutral" to "outperform" during trading, with a share price estimate of US111. FedEx ended trading at USD91.59.

Hawaiian Airlines (+2.1%) also made a strong gain. During trading, the carrier announced it has increased its firm commitments for new long-range Airbus A330-200 aircraft from 10 (including three already in service) to 16, with the additional six to be delivered between 2012 and 2015. Hawaiian exercised six Airbus A330 purchase rights under the terms of its 2008 purchase agreement and acquired additional purchase rights in this transaction, leaving it with four purchase rights remaining. The airline took delivery of its third new A330 from aircraft leasing company AWAS in Nov-2010 and will accept two deliveries in the coming year.

JetBlue was also up for the session after Standard & Poor's raised the LCC’s outlook from "stable" to "positive" and stated it may upgrade the LCC’s credit rating as its earnings improve. The company also reaffirmed its B- credit rating for JetBlue. The carrier reported a USD15 million improvement in net profit for 3Q2010, to USD59 million.

US Airways (-3.6%) led the falls, as oil prices rose 2.2% to USD85.60. Stifel Nicolaus analyst Hunter Keay stated the carrier has a policy of not hedging fuel requirements, which affected its stock price for the session.

TAM (-1.4%) fell on news Brazil’s Anac suspended the sale of domestic air tickets for all of the carrier’s services through to 03-Dec-2010 after the carrier’s cancellations and delays topped the industry average. TAM stated its delays and cancellations came after heavy rains in some of Brazil's largest cities at the end of last week forcing it to reschedule most domestic services. 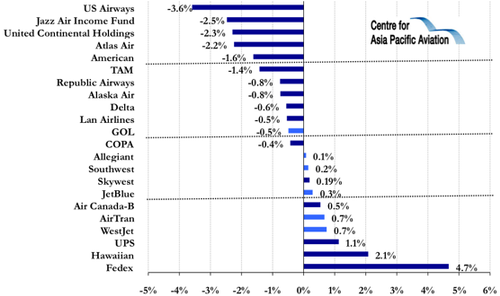