FedEx and UPS lead the US carriers higher; Republic Airways down

FedEx attributed the increase to tight cost control and improved international demand. FedEx has cut both jobs and salaries, amid the global financial downturn. The carrier concluded the improving international demand meant it is starting to see signs of a recovery. FedEx added however, that it was unsure how long it would take until demand fully recovered. The forecast of a recovery in freight consequently lifted UPS (+4.4%).

Delta and American fight it out over JAL

Delta Air Lines (-0.5%) and American Airlines (+0.2%) are in talks with Japan Airlines (JAL) to purchase a stake in the Japanese carrier. Delta has reportedly expressed interest in investing up to JPY50 billion (USD550 million) in JAL, giving the US carrier a stake of up to 11.2% in the Japanese airline. Meanwhile, American Airlines stated it is also negotiating a possible investment in JAL, as part of a push to establish a “far reaching” and comprehensive immunised trans-Pacific JV agreement. See separate report: Delta Air Lines' Japanese and Asian Dilemma

Expressjet (-2.4%) stocks fell the most by the end of trading, despite SmarTrend adjusting its rating of the stock to “buy” on the day. The analysts stated Expressjet’s stocks have returned 44.2% since 21-Aug-09. 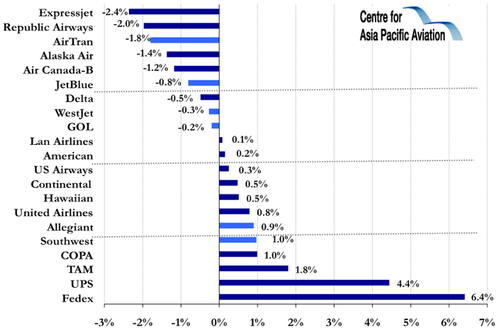