ExpressJet to be acquired by SkyWest; Republic Airways profit down on acquisitions

A slight majority of North and South American airline shares moved higher on Wednesday (04-Aug-2010) after SkyWest announced plans to acquire ExpressJet and wider markets advanced. Airline stocks were also boosted by a 0.1% decline in oil prices to USD82.47.

ExpressJet to be acquired by SkyWest

Republic Airways profit down on acquisitions

Republic Airways (+7.0%) was also up after the group reported a net profit of USD2.6 million for the three months ended 30-Jun-2010. However, this was a decline of 81.5% year-on-year, which it partly attributed to the purchase of Frontier Airways and Midwest Airlines. More positively, revenue climbed 111.6% for the quarter, to USD683.3 million.

US Airways traffic down for Jul-2010 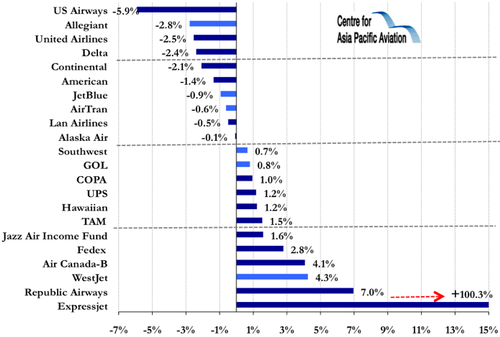