Continental Airlines’ regional operator, ExpressJet (-6.1%) led the airline stock falls yesterday, on a day when most were fairly steady.

Newly installed CEO Thomas Hanley, this month said he will take the immediate period to assess each cost centre before developing a battle plan to turn the company’s fortunes around. ExpressJet operates a fleet of 244 ERJ-145s and all regional jet operators are suffering against the headwinds of high fuel costs and always-cost conscious major airlines.

Whereas the majors can now recover a growing proportion of revenue from ancillary charges, these are not so readily available for the regionals. And the first quarter loss included payments made to Continental for the higher utilisation that the major was delivering to ExpressJet; when utilisation is down, the revenue compensation works the other way.

But, as the company’s CFO, Phung Ngo-Burn noted in Apr-2010: “The total of payments Continental made to us (were) approximately USD9 million and as Continental increases utilisation, it flips the other way and we pay them, up to USD10 million. We paid USD1.3 million in 1Q-2010 and USD1.2 million in 4Q-2009.” Importantly, for this year then, as Ms Phung noted, the airline has “USD7.5 million remaining that we expect to pay through 2011.”

Only Alaska (+1.8%) and Republic (+1.6%) stocks made significant gains on the day. Alaskan yesterday announced a new service to Kauai to begin in early 2011. 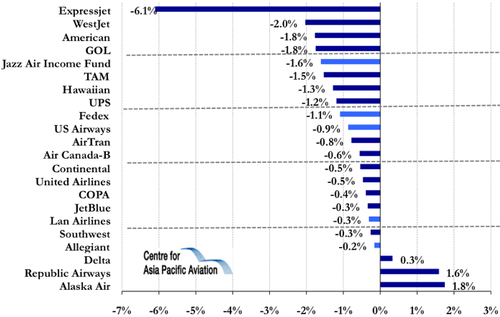