ExpressJet Holdings (+0.1%) made only a minor gain on Wednesday (10-Oct-2010) as North and South American airline stocks ended trading mostly down. Late in trading, the carrier announced its stockholders have voted to adopt and approve the merger agreement between SkyWest and ExpressJet Holdings at a special meeting held on 10-Nov-2010 in Houston, Texas.

On 04-Aug-2010, ExpressJet and SkyWest announced they entered into a definitive merger agreement whereby SkyWest will acquire all of the outstanding common stock of ExpressJet for USD6.75 per share in cash subject to the conditions of the definitive merger agreement. SkyWest advised that its intention is that ExpressJet Airlines will be merged with its wholly owned subsidiary, Atlantic Southeast Airlines, following the closing of the transaction and receipt of all required regulatory approvals. The merger is currently expected to close on 12-Nov-2010.

Also in Latin America, Copa Airlines (-0.1%) slipped despite news Star Alliance has accepted Copa’s plans to enter the global alliance. Avianca-TACA will also join the alliance. The combined network of the two airline groups gives Star Alliance a more prominent footprint in Central America, the Caribbean and the northern and western regions of South America, as well as additional direct connections between Latin America and cities in Europe.

Elsewhere, Hawaiian Airlines (-2.8%) and Delta Air Lines (-2.3%) stocks made the biggest losses for the session, while Republic Airways (+8.6%) made its second consecutive daily gain after announcing on 08-Nov-2010 that it intends to offer 12 million shares of its common stock in an underwritten public offering. 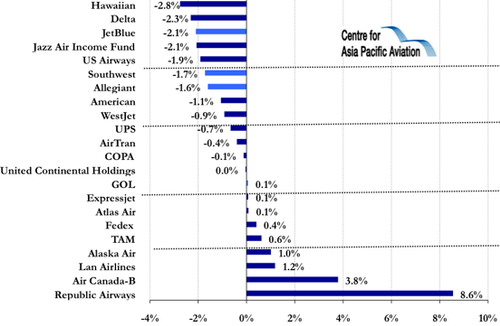