North and South American airline stocks declined for another day on Wednesday (28-Jul-2010) as the Dow (-0.4%) retreated on news manufactured durable foods sales declined by USD2 billion in Jun-2010 compared with May-2010. The AMEX Airline Index fell 0.6% as a result.

ExpressJet used proceeds from auction rate transactions to repay its outstanding USD5 million Citibank credit facility. The company is also scheduled to complete the redemption of additional USD5.0 million in principal of its 11.25% Convertible Secured Notes due 2023 on 02-Aug-2010

Hawaiian President and CEO, Mark Dunkerley, defended the decline in profits, telling the Honolulu Star-Advertiser, that the lower earnings need to be considered in context, with the quarter comparing with “a record year in 2009”. He noted the majority of US carriers are now comparing their profitability for this quarter with a year of record losses in 2009.

Elsewhere, Alaska Air (+1.0%) gained. Earlier this week, analysts at Dahlman Rose & Co stated they are positive on the carrier’s stock, along with Delta Air Lines (-1.5%) and US Airways (+0.8%). The analysts cited Delta and Alaska Air’s use of free cash flow to pay down debt, adding that for the first time in three year, US Airways is no longer looking to raise capital. 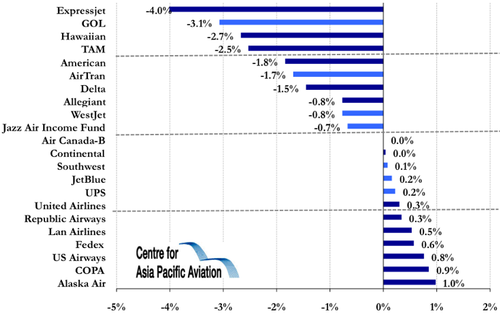