Expressjet down despite rise in load factor; US Airways expected to report record profit for 3Q2010

North and South American airline stocks advanced on Monday (13-Sep-2010) as the Dow (+0.8%) on improved Chinese economic data and banks reached an agreement on capital reserve regulations. The AMEX Airline Index (+1.1%) ended the day higher as a result.

Allegiant (+5.1%) was the biggest gainer of the day after its Board of Directors approved an expansion of its stock repurchase programme, having authorised the repurchase of an additional USD50 million of the company's stock.

Expressjet down despite rise in load factor

US Airways expected to report record profit for 3Q2010

US Airways fell, despite AirlineFinancials.com forecasting the carrier will report a record 3Q profit of USD225 million next month, with revenue of USD3.2 billion. The result would be a massive improvement from the carrier’s 3Q2008 loss of USD865 million, including special items. According to the analysts, Alaska Air was the only carrier of the nine largest US airlines to have a profit margin higher than US Airways for 2Q2010. 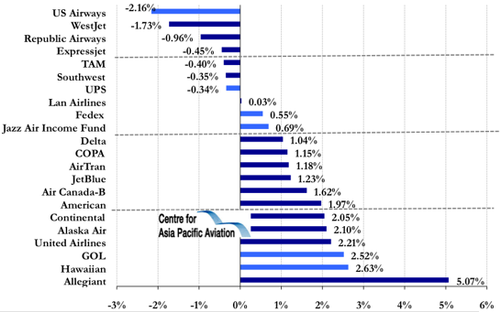