Taiwan’s EVA Air continued to experience passenger yield weakness in Dec-2009, although the worst may now be behind the carrier, as yields appear to have bottomed out in Jul-2009/Aug-2009 and are starting a slow but steady improvement.

The carrier reported a 9.6% reduction in passenger yields in Dec-2009, for the first month of single-digit reductions after eight consecutive months of double-digit contractions (and 11 months of overall contractions). The reduction also comes off a period of yield growth in Dec-2008, of 6.4%.

However, these yield improvements come off a negative base in Dec-2008, when EVA Air’s cargo yield was down 15.4% year-on-year. 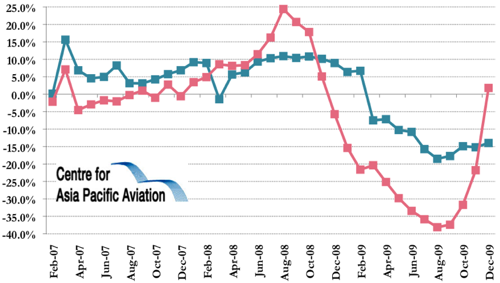