EVA Air shares gained 4.2% yesterday as the carrier reported a turnaround to profitability at the operating and net levels in the six months ended 30-Jun-2010. Operating and net profits stood at USD163.3 million and USD163.5 million, respectively, in the six-month period (compared with losses of USD69 million and USD53 million in 1H2009), as revenues increased 54% year-on-year to USD1,571 million, exceeding a 30.5% increase in operating costs to USD1,310 million.

The result boosted the carrier’s cash and cash equivalent position by 188% to USD306.2 million.

Also reporting financials on Friday was Philippine Airlines, which remained profitable in the three months to Jun-2010, albeit at reduced levels. The carrier reported a net profit of USD31.6 million, a 11% year-on-year revenue, despite a 30.2% increase in revenues to USD426.7 million. Total costs increased at a greater rate, by 37.2% to USD391.6 million.

Indian aviation stocks were among the most active in Mumbai on Friday, buoyed by hopes that an economic rebound will result in higher demand, especially given the start of  the holiday season in Oct-2010. Shares in Jet Airways, SpiceJet and Kingfisher ended the day up 4.5%, 1.8% and 0.5%, respectively.

Meanwhile, shares in ANA declined 1.6% on Friday, on the same day the carrier released full details of its service and network upgrades from Tokyo Haneda Airport and revisions to its winter 2010 network. JAL Group also announced details of its winter 2010 schedule, and separately stated it is seeking to go public again by the end of 2012. 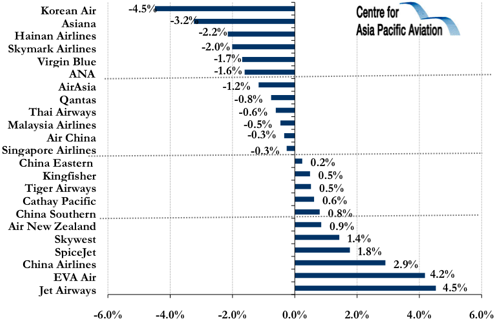