Asian airline share gains were led yesterday by Virgin Blue, which jumped 5.3%, reflecting stronger conditions in the Australian share market and moves by rivals not to block the proposed alliance between V Australia and Delta.

United Airlines has joined Qantas (shares +4.2% yesterday) and Singapore Airlines (+1.5%) in confirming it would not oppose the proposed V Australia-Delta Air Lines Pacific JV, stating it had asked only that the Australian Competition and Consumer Commission to give a “thorough review of the application to ensure all market participants have the opportunity to compete on a fair and level playing field".

Cathay Pacific's shares slipped 0.9% yesterday. The carrier reported a “pick-up” in leisure travel towards the end of Jul-2009, but faces a challenging outlook as a result of ongoing economic weakness. This month's typhoons could also impact volumes. The carrier stated “intense competition” is putting continued and “considerable” pressure on yields, as premium demand weakness continued last month.

Across the Taiwan Strait, EVA Air reported a concerning 18.5% reduction in passenger yield and an extraordinary 38.1% reduction in cargo yield in Jul-2009, resulting in a massive revenue reduction in the month of 26%. This occurred despite a 6.6% increase in passenger numbers and a 1.4 ppt load factor improvement to 80.8%. The carrier’s share price gained slightly yesterday, up 0.2%.

Also reporting traffic results yesterday was China Southern. The carrier experiencing a 14.1% jump in passenger numbers, driven by strong domestic growth of 15.5%, with load factor virtually flat at 75.2%. Cargo growth was also in positive territory in the month, up 0.4%, driven by a 12.7% year-on-year increase in international cargo volumes. China Southern's share price fell 1.1%. 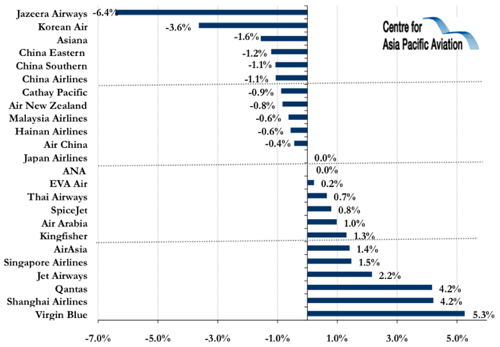