As European and global markets headed downwards on 29-Jun-2010, airline shares led the way, in most cases showing falls of the magnitude of twice the indices’ losses. There was little to distinguish the reasons for the falls, other than the economically sensitive nature of the industry.

Vueling (-6.0%) led the way down, losing all of the ground it had gained on the previous day.

Despite announcing the conclusion of their merger plans, shares in both British Airways (-5.9%) and Iberia (-4.9%) fell steeply yesterday. To conform with Spanish law, the carriers need to file a merger plan. The carriers signed a definitive merger agreement in Apr-2010, but the new document reiterates the merger timetable, which provides for simultaneous General Meetings in Nov-2010 to approve the agreement, for finalisation in Dec-2010.

One barrier to progress saw some movement earlier this month, when on 22-Jun-2010, BA announced it had reached agreement with the trustees of its New Airways Pension Scheme (NAPS) and Airways Pension Scheme (APS) on a recovery plan to address the carrier’s pension deficits. This would maintain British Airways’ annual contributions at the current level of about GBP330million, plus agreed annual inflation-related increases averaging 3%.  The agreed deficit contributions continue until 2026 for NAPS and 2023 for APS.

If this is not approved by the UK Pensions Regulator by 30-Sep 2010, Iberia has the right to withdraw from the merger agreement. The merger is also subject to EU Commission approval on competition grounds.

Meanwhile, British Airways also last week put forward a further offer to Unite, the striking flight attendants’ union, giving some cause for optimism that a resolution of the festering dispute may be getting closer.

Dart Group the only rise

Only Jet2Go owner, Dart Group shares (+8.0%) rose on the day. But this was on the back of the Group’s other interests, in Fowler Welch-Coolchain, a refrigerated air distribution company. Jet2Go in Jun-2010 reported and operating profit which slipped by 57.8% to GBP15.1 million for the year ended 31-Mar-2010, on revenues down 4.4% year on year. 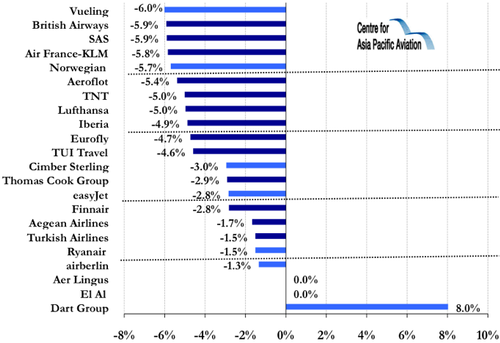