European traffic crossroads - Signs of a sustained recovery or a relapse?

Europe’s traffic decline has been steadily abating over recent weeks, with the region's full service carriers keeping capacity growth to a minimum, while passenger demand has gradually worked its way out of the deep hole thanks to unprecedented discounting. European full service carrier demand and capacity have essentially been aligned for the past month and a half, a feat unmatched in the early stages of the year.

However, traffic has taken a turn downwards, according to the Association of European Airlines' (AEA) latest traffic report. The question now is if this is just a blip in the recovery, or if it heralds a return to the dramatic declines in demand seen earlier in the year. And, if it does fall back sharply, are Europe’s full service airlines prepared to cut capacity again to match?

The sharp weekly upturns in demand earlier this year were typically met by equally severe relapses, reflecting one-off events, eg differences in the timing of Easter. However, demand had become more consistent over the past six weeks and had been trending upwards.

But Lufthansa Passenger Airlines’ new CEO, Christoph Franz, warned last week that the German giant’s competitors are operating at more favourable cost levels and can “woo important customer groups away from us with more attractive fares” - a tacit admission that discounting has been responsible for the stabilisation, but such moves have come at a cost. 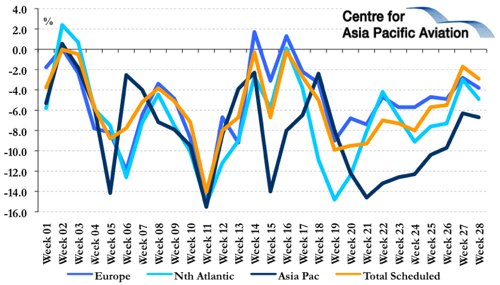 Of the three major traffic regions, the Asia Pacific saw the worst declines last week, falling 6.9% year-on-year. Traffic on the North Atlantic was down 3.9% in Week 28, after a 3.0% fall in Week 27 (NB: US carriers reported dire reductions in yield on trans-Atlantic routes in Jun-2009). European cross border traffic was again the strongest, down 3.8% in Week 28.

Capacity cuts did not match the decline in traffic, as European carriers continue to slow the rate of capacity reduction. In Week 28, AEA members reduced total scheduled capacity by 2.7%, compared to 3.1% the previous week. This is the smallest reduction for more than three months. 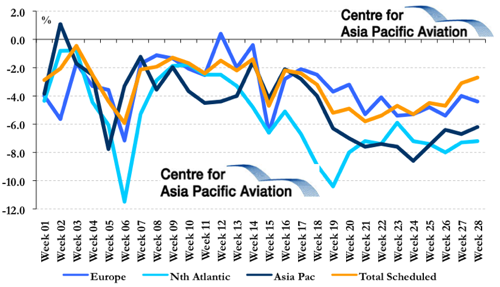 The strongest cutbacks continue across the North Atlantic, with a 7.2% fall, almost unchanged from the 7.3% cut last week. Capacity cuts across the North Atlantic have been stronger than the demand decline for the last three weeks. Asia Pacific capacity was down 6.2% while European capacity came back 2.7%, only slightly lower than the demand fall. 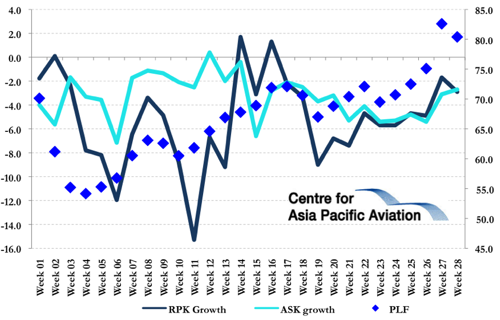 Load factors are heading back downwards with traffic, as the remarkable upwards run comes to an end. After hitting 82.6% last week, total scheduled passenger load factors for AEA members dropped to 80.4% in Week 28. 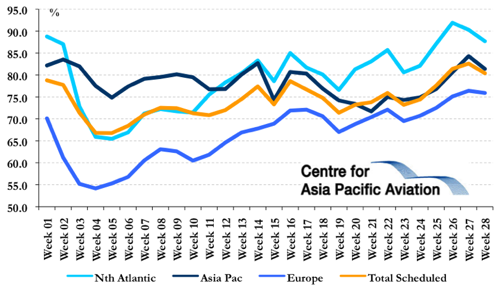