British Airways announced plans on Friday to conduct ground tests of a range of biofuels, in co-operation with Roll-Royce, in 2010. British Airways will purchase up to 240 tonnes of four different biofuels for its research.

Shares in Irish carriers, Aer Lingus (+2.3%) and Ryanair (+3.2%) gained on Friday, as Michael O’Leary, the Ryanair CEO told RTE Radio, he would like to see a Ryanair takeover of Aer Lingus prior to his retirement. Mr O’Leary, who has delayed his projected retirement date several times, now expects to retire in two to three years.

Shares in Turkish Airlines gained 1.3% on Friday, as its Director for the Czech Republic and Slovakia, Fatma Y Celer, stated the future of the airline belongs with international alliances that will enable the carrier to compete in terms of its network offering and pricing. Turkish Airlines is a member of the Star Alliance. 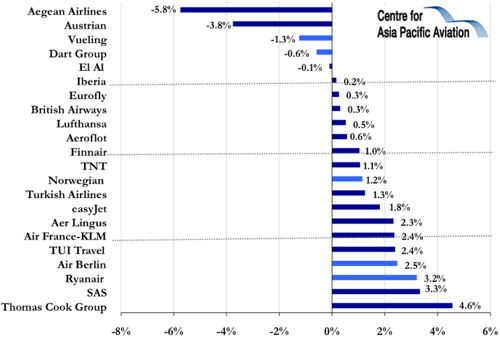