Airline stocks were mixed yesterday with little movement on the European markets. The Paris CAC Index was flat, while the Frankfurt DAX dipped 0.03% and London FTSE 100 added 0.06%.

Lufthansa, which gained 1.4% yesterday, is expected to focus on the Indian market in 2010 and 2011, stating the country “offers us big potential” to deploy new aircraft deliveries, including 15 A380s and 25 B747-8s by mid-2012. The carrier also plans to further improve synergies with Austrian and SWISS on Indian routes. Austrian and SWISS operate five and ten services per week to India, respectively.

Elsewhere, Aer Lingus, which declined 2.7% yesterday, formalised its codeshare agreement with United Airlines to jointly operate scheduled service between Washington Dulles and Madrid. The service will launch on 28-Mar-2010 and it is anticipated that additional routes may be made available for sale during 2010 to commence operation in Summer 2011.

According to a statement, "both carriers will equally share the commercial and operational benefits and risk, with Aer Lingus managing the operational aspects of the new partnership services and United Airlines taking responsibility for managing revenue generation. The partnership route structure will be sold under both Aer Lingus and United Airlines codes and will leverage both parties' network capabilities".

Economic conditions in Baltic markets to worsen in 2010: airBaltic

However, airBaltic stated it expects economic conditions in the Baltic markets to "worsen in 2010 compared to 2009”. The airline added “GDP will continue to decline in 2010 and no recovery can be expected until Summer 2011". The airline expects "further collapses of local passenger traffic in the Baltics, as buying power of residents diminishes due to higher taxes, lower incomes and rising unemployment". airBaltic will launch at least nine new routes to further strengthen its product in 2010, focused on niche markets in Scandinavia and the CIS where airBaltic faces less competition. 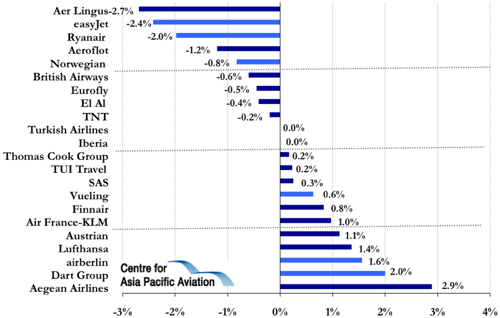