After several weeks of near stability, both passenger traffic and airline capacity for Europe’s airlines has ticked back towards positive territory. Although airline CEO and consumer confidence are still lingering in the doldrums, passenger traffic has made another leap towards breaking back into growth, on the back of persistent discounting and heavy competitive influences.

However, traffic does appear to be making progress towards recovery, at least for some carriers. During Jul-2009, Air France-KLM's passenger traffic was down just 4.5% and British Airways traffic fell just 1.2% (the smallest decrease since May-2008, excluding the one-off effect of the late Easter in Apr-2009).

Still, while some major carriers are improving, other full service airlines are not witnessing the same recovery. Finnair's traffic was down 6.2% in Jul-2009, while SAS Group passenger traffic was down 14.1%.

Yields still remain under considerable pressure and are expected to remain weak at least for the remainder of 2009. British Airways noted last week that continued yield uncertainty will make revenue forecasting difficult.

A kick-up in passenger traffic 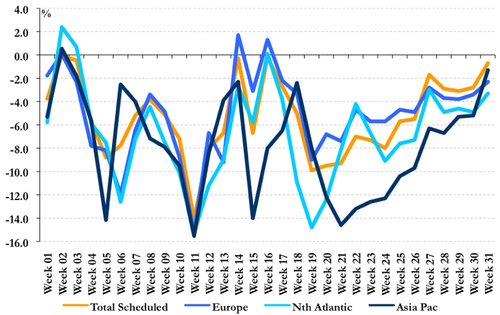 Foremost among the passenger resurgence was traffic to/from the Asia Pacific region, which fell by just 1.3% during Week 31, compared to a 5.2% fall in the previous week. This is the best performance for Asia Pacific traffic since early Jan-2009.

North Atlantic traffic was down 3.3% (compared to -4.9% in Week 30), the smallest fall since the Easter holiday period. European traffic also improved, down just 2.3% - again the best weekly result since Easter.

Capacity cuts continue to slow, with a major retardation of cuts on long-haul sectors. Overall AEA members reduced capacity by 2.0%. 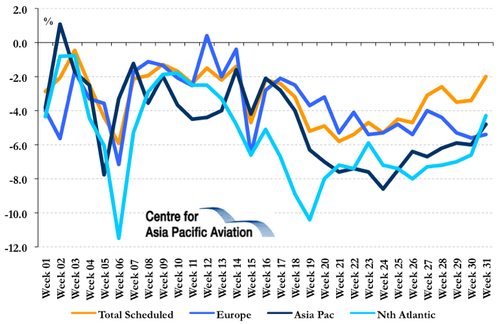 Balanced against the resurgence in capacity is the fact that demand continues to improve ahead of capacity, and has done so now for more than a month for Europe's full service carriers. 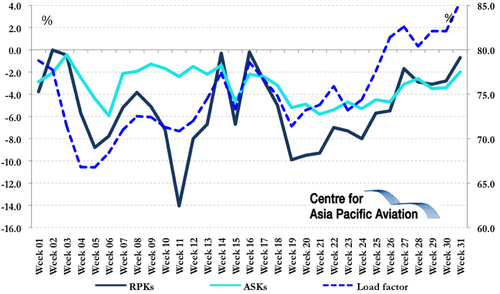 AEA load factors have repeated the performance of demand, picking back up after several weeks of stability. Overall total scheduled load factors were 85.2%, with all regions hitting yearly highs. 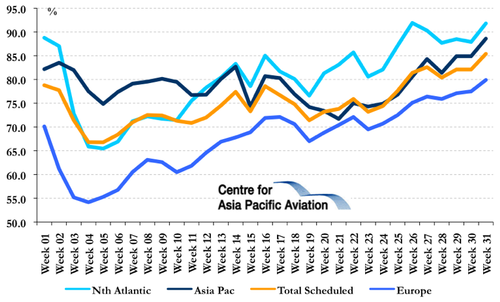 Outlook: Winter test to be harsh

But a return to growth and a return to profitability are different matters. The best AEA members can hope for is a mild economic recovery by late 2009/early 2010, although the upcoming Winter is still expected to be a desperate time for many.

See related article: Ryanair looks to Italy for growth, Alitalia to transform Air One into an LCC