European carriers uncertain about the prospects for 2010

Airline confidence about profitability over the next 12 months has turned a corner, according to IATA’s latest Business Confidence Index (BCI). But European airline views about the future are far less glowing than their counterparts' in other areas of the world.

The IATA BCI shows that 73% of airline CFOs and heads of cargo expect that profitability will improve over the next 12 months (although this does not mean that carriers will be profitable, but rather a majority of airlines expect losses to diminish).

The industry body also stated that there was a notable difference in responses to the survey between airlines in Europe and Asia. All Asian carriers responding to the BCI expect an improvement in profitability over the next 12 months, while a significant minority of European carriers expect a further deterioration in profits.

Lufthansa this week warned that it could miss its target of making an operating profit in 2009, adding that the “positive outlook for the year remains subject to very considerable risks”. The German carrier acknowledged that the Group’s “earnings continue to be subject to very considerable risks as a result of volume and price trends and renewed oil price increases - a sharp drop in revenue and continued pressure on earnings is therefore expected for the full year"

On 22-Oct-2009, Iberia's Board of Directors adopted a new strategic plan (Plan 2012) to address the "dramatic situation" now faced by the airline, with declining revenues, weak demand and mounting losses amid an "unsustainable" situation. The new plan calls for greater emphasis on the generation of revenues, cost savings and efficiency, improved service, and a shift in the airline’s approach to the short- and medium-haul segment. To achieve this "paradigm shift", the airline plans to create a new network airline based in Madrid which will feed and distribute traffic to Iberia’s growing long-haul network, effective from 2011.

Air France-KLM, which is also considering radically reorganising its short/medium haul platform, meanwhile announced plans to reduce capacity by 1.6% in the upcoming Winter schedule, due to persistently weak demand. Compared the Winter 2007 season, the carrier’s capacity will be down by 2.8% for long-haul services and down 6.4% for short and medium-haul services.

European recovery to lag in 2010

2010 is shaping up to be another tough year for European airlines. The economic recovery in Europe is expected to lag that of most of the world, particularly emerging and developing markets such as Asia, which are already showing a much firmer economic recovery than developed economies.

The Conference Board stated, "strong gains over the last six months in the LEIs for the Euro Area, Germany and France point to a continuing recovery process. However, current economic conditions remain weak and the continued downtrend in Euro Area employment combined with expiring stimulus measures pose a risk of an extended weak growth period following the near term recovery". 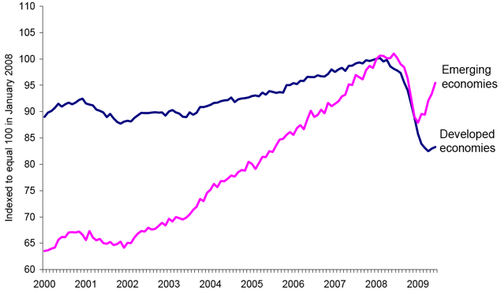 European GDP levels have dropped over 2009 and the Euro zone economies are generally expected to recover more slowly over 2010. In comparison Asia Pacific economies are forecast to grow better than 2% this year and by approximately 4% in 2009. 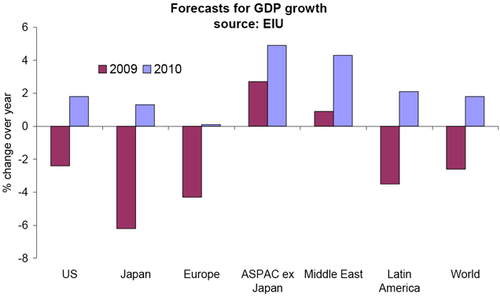 According to IATA, the consumer and air travel recovery in Europe (and the US) will be weaker than normal, as debt burdened consumers will “significantly reduce any additional income available for spending on travel” in favour of reducing their indebtedness. Asian consumers, with significantly lower debt levels and benefiting from stronger government support in some cases, will prompt a faster and stronger improvement in traffic volumes than in Europe or North America.

European capacity cuts in 2009 are expected to be less strong than the overall global average, as the highly competitive market and slot rules at airports force them to maintain operations. At the same time, their traffic growth is expected to lag global averages.

In 2010, European passenger and capacity are expected to reverse the slides seen in 2009, but will still not return to pre-downturn levels. Passenger traffic is expected to increase by 3%, while capacity is expected to climb 2%.

The Association of European Airlines (AEA) reports that scheduled traffic (RPKs) for its 33 member carriers for the week ended 12-Oct-2009 (Week 42) declined 2.2% year-on-year. The rate of decline in traffic has been steadily accelerating since the end of the Northern Summer. 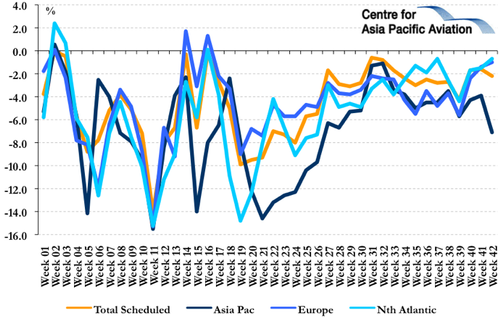 Traffic on both the North Atlantic long-haul market and European cross-border traffic has been improving over late Sep-2009 and early Oct-2009. Traffic across the Atlantic was down just 0.7%, while inter-European passenger traffic fell 1.0% in Week 42, the strongest result for the year to date, excluding the one off effect of the later Easter holiday period this year.

Asia Pacific traffic has experienced a rapid downturn over the past few weeks, with RPKs down 7.1% in Week 42, the heaviest decline in passenger traffic since Jun-2009.

Capacity reductions have been accelerating since Jul-2009, although levels in both the trans-Atlantic and long-haul Asia Pacific markets have recovered somewhat from the lows seen mid-way through the year. Total capacity (ASKs) declined by 5.0% in Week 42, the first weekly improvement for early three months, indicating that the decline may be beginning to plateau. 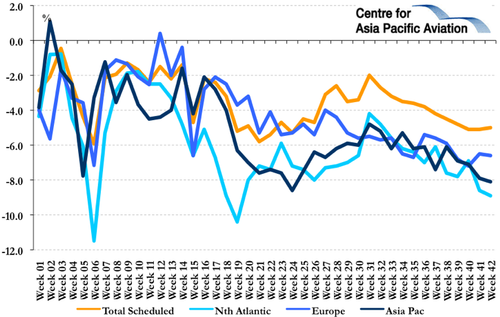 Capacity on Asia Pacific routes was down 8.1%, while trans-Atlantic capacity fell 8.9% (the sharpest decline for more than five months). Cross-border European traffic dipped 6.6%

After climbing to record levels over the Northern Summer, load factors for Europe’s full service carriers have stabilised, with only minor variations over the past two months. 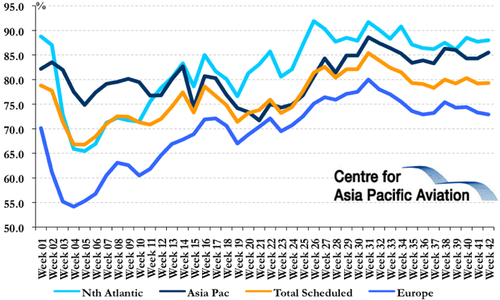 Load factors for total scheduled member traffic were 79.3% in Week 42, having varied by less than two percentage points since Aug-2009.

North Atlantic load factors remain the highest, at 88%, just ahead of the Asia Pacific markets, at 85.5%. European cross-border load factors have remained firmly lower, at 72.9%.

Clearly, the traffic performance has not expectations in all market segments and regions, as airlines announce ever more drastic restructuring moves and more profit warnings emerge.