Lufthansa, which executed the takeover of Austrian Airlines (shares steady on Friday) late last week, has reportedly entered talks with British Airways to offload the German carrier’s stake in bmi to the UK’s flag carrier. However, BA reportedly stated than any agreement with Lufthansa would be secondary to the carrier’s continuing merger talks with Iberia. BA is reportedly considering financing a move for bmi through a share issue.

Virgin Atlantic maintained its interest in bmi. The carrier held discussions with Lufthansa regarding the future of bmi last year. According to Virgin Atlantic, BA is “trying to gain more slots, wipe out rivals and become a pure monopoly”.

Ryanair meanwhile stated it would ultimately succeed in acquiring Aer Lingus. The LCC is already the largest shareholder in Aer Lingus, but has failed twice in its attempt to takeover the carrier. Is a third offer looming?

Elsewhere, shares in Air France-KLM gained 1.5% on Friday, despite reports it will be ejected from France's benchmark stock market index and will be replaced by oilfield services group, Technip, later this month. 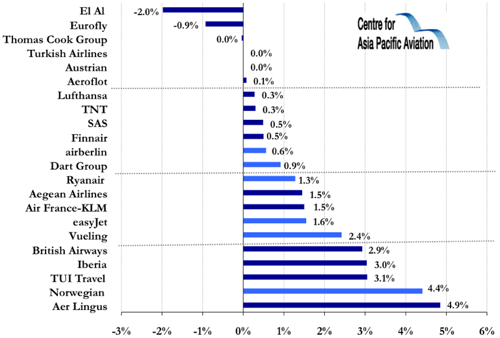