Shares in Air France-KLM fell 2.9% yesterday, as it revealed its passenger traffic slumped 7.0% year-on-year in Jun-2009 and load factors eased 1.1 ppts to 80.3%. British Airways and Lufthansa both dipped 1.4% as the London FTSE closed virtually flat (-0.2%) and the Frankfurt DAX closed 1.2% lower yesterday.

Lufthansa is expected to offer antitrust concessions to the European Commission in the “next day or so”, for the Commission to decide on the carrier’s takeover of Austrian Airlines. Last week, the Commission launched an in-depth investigation into the planned acquisition citing “serious” competitive concerns. Austrian Airlines’ shares gained 1.9% as investors welcomed progress in the next phase of its restructuring plan (see below). 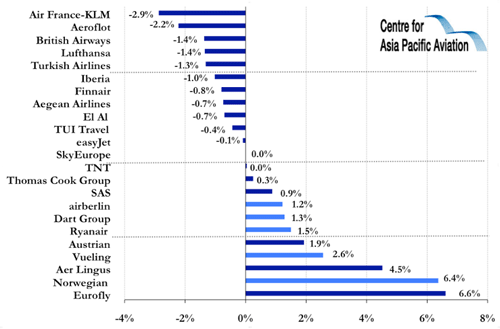 Austrian Airlines presented the first measures of its sustainability package designed to increase its long-term competitiveness. Management has now decided on the next measures – the replacement of 50-seater aircraft with larger aircraft from the existing fleet. The reason: the collapse of the high-price business travel market and lower unit costs of larger aircraft.

Austrian’s 50-seater fleet will be reduced by up to 14 aircraft, including Canadair Regional Jets, which are operated by Tyrolean Airways under the brand Austrian arrows and Dash 8-300 aircraft.

Austrian Executive Board Member, Andreas Bierwirth, stated, “We are currently checking our entire network – all routes, frequencies and transfer points – and will adapt these to the market situation accordingly. The following criteria are paramount for us in this regard: We want to increase profitability, despite lower yields, by using larger aircraft. And we want to retain the valuable transfer flows and the network in the core CEE market.”