Shares in Lufthansa gained upon the release of the Group’s improved traffic results for Aug-2009. Overall passenger numbers were up 13.4% year-on-year and load factors increased by up to 3.3 ppts each for the Europe (76.2%) and Asia Pacific (87.2%) regions, with the Middle East/Africa load factor the only to decline, down 6.3 ppts to 75.8%. Cargo volumes were down just 2.7% year-on-year in Aug-2009.

...and BA/SAS/Aer Lingus progress on jobs

A jump in British Airways’ shares is a sign investors welcome the conclusion of union negotiations on job cuts. The carrier plans to make its proposal to cut 3,500 jobs voluntary.

SAS and Aer Lingus are also trimming their operations. The Scandinavian carrier plans to cut between 200 and 500 positions from SAS Technical Services Norway by the end of 2009, while the Irish carrier will cut staff as it removes aircraft from its bases at Dublin and Belfast.

The new Aer Lingus CEO's earnings are linked to a return to profitability and increase in the carrier’s share price to above EUR2.20 by 2014. The carrier revealed Mr Mueller will be paid a EUR475,000 base salary, the same as his predecessor, Dermot Mannion. Mr Mueller is eligible to receive 500,000 shares on the completion of two years service in lieu of bonuses, currently worth EUR295,000. The new CEO is granted 1.5 million share options, to be awarded in equal tranches after three, four and five years service, the first after the share price reaches EUR1 in 2012, the second at EUR1.60 and the third at EUR2.20 in 2014. Mr Mueller purchased his first stock in the carrier on Tuesday, obtaining 50,000 shares for EUR27,750. 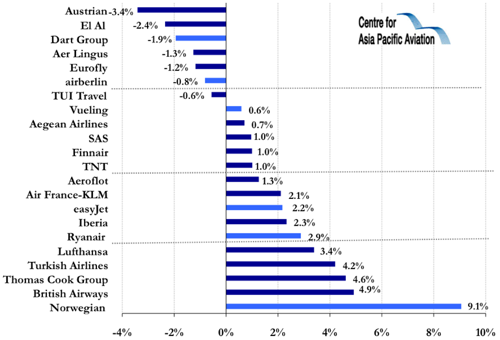