Other European airport companies did not perform as well, with AdP down 0.5%, after signing a major real estate deal at the beginning of the week, while Hochtief lost 0.8%.

Meanwhile, airport privatisation in Europe has appeared to take a backward step, with the Czech lower house of parliament blocking a government plan to sell the country's main airport in Prague, voting in a bill requiring the airport to be owned by the state or a state-owned corporation. The planned sell off had been valued as high as USD3 billion.

Oct-2009 traffic at Prague Airport declined 5.2% year-on-year, as international traffic fell 5.3% and aircraft movements contracted 10.1%. However, cargo volume is picking up, climbing 3.4% compared to the same month in 2008. 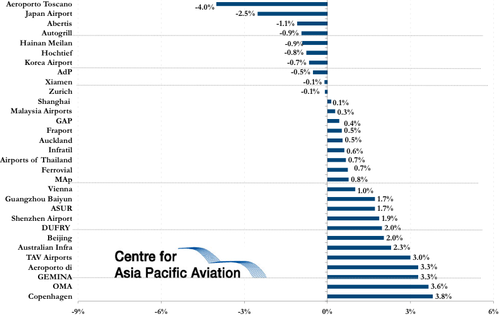