Another major round of capacity cuts is imminent in Europe, as markets remain depressed and airlines take advantage of a major reprieve on slot rules. Revenues are decreasing at a faster pace than traffic, meaning they have no option but to cut capacity to restore load factors and regain some semblance of control over pricing.

Association of European Airlines' (AEA) Secretary General, Ulrich Schulte-Strathaus, stated, “right now, we cannot predict how long this current downturn will continue. We have nothing to benchmark it against – it has already exceeded in severity any past economic upheavals in our industry”.

Latest weekly traffic data confirms continued weakness in European travel markets. In the week ended 03-May-09 (Week 18), total traffic (RPKs) for AEA members was down 5% year-on-year, after a fall of 2.7% the previous week (Week 17).

Cross-border European traffic was down 3.2% in Week 18, Asia Pacific traffic was down 2.4% (an improvement from deep falls in the previous three weeks), while considerable weakness was experienced again in the North Atlantic region, with RPKs slumping 10.8% in Week 18, after a 3.8% reduction in Week 17. 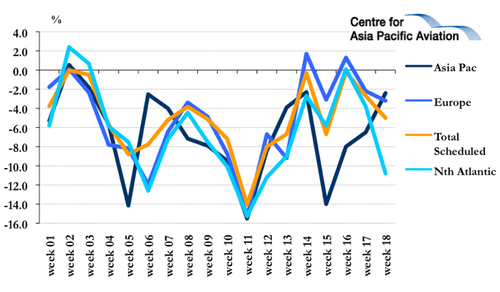 Capacity levels must be brought into line with demand quickly

AEA members have been unable to maintain the pace of capacity reductions to match the drop-off in demand. Total member capacity (ASKs) fell 3.2% in Week 18, including an 8.8% reduction on the North Atlantic and a 2.6% reduction within Europe. European carriers cut capacity to the Asia Pacific region by 4% - the only region where supply was outstripped by demand (-2.4%). 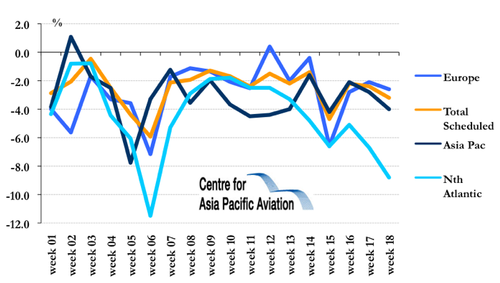 The load factor improvements seen since early Feb-2009 have levelled off over the past month. Only North Atlantic load factors are holding above 80%, meaning more must be done to match capacity to demand in other regions. 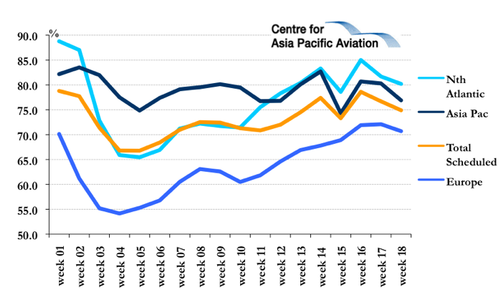 Europe's full service carriers are expected to make additional cutbacks to capacity in coming weeks to restore some equilibrium to the market.

Relief has come in the form of an easing in slot rules, which will allow airlines to cut routes that make no economic sense but are flown to retain crucial slot times. The AEA applauded the EU’s decision to waive the ‘use it or lose it’ slot rule for the Summer season, stating the economic downturn has “created a temporary excess in capacity over demand which the airlines are constrained from addressing by rules designed for a growth market”.

Mr Schulte-Strathaus concluded, “airlines, struggling to contain costs in the face of free-falling revenues, will welcome the opportunity to align more closely their production with the reduced demand”.