European airlines have been quite liberal with their capacity in 2011, even in the face of economic uncertainty and high fuel prices. The trend continued this summer and carriers have, on the whole, enjoyed strong traffic and load factor gains. But will it convert into profitability?

Reporting season for the second quarter (and first half) of 2011 is under way, with mixed results across the continent. One theme common to all carriers (across all business models) is the impact of higher fuel prices, which has seen many airlines introduce surcharges or lift fares (or a combination of the two).

There is a particular emphasis for European carriers to deliver a strong earnings performance in the current summer season to make up for a tough few years and a difficult start to 2011.

But sovereign debt problems continue to stalk the continent, as demonstrated by the recent bout of financial market turmoil. Already it appears European carriers are looking to drastically slow, and in some cases reduce, capacity in the coming winter period. Several of the regions major LCCs are also slowing or cutting winter capacity growth plans. This capacity discipline should be yield-supportive for carriers in their weakest trading period.

Europe’s major LCCs - easyJet, Ryanair and Norwegian – led the way in Jul-2010, by reporting year-on-year gains in load factors. easyJet reported a 91.7% load factor in Jul-2011, a 1ppt year-on-year increase. Aug-2011 is typically easyJet’s strongest month for load factors, when they approach 93%. (By contrast, easyJet’s average loads fall below 80% in January). easyJet reported a strong set of results for its third quarter (ended 30-Jun-2011), increased its full-year guidance and stated it had recorded stronger-than-expected bookings for the current summer period.

At the other end of the spectrum, Finnair, Vueling and Cimber Sterling reported the weakest load factors, below 80%. The Scandinavian carriers have complained of overcapacity in the Nordic market this year, with the overcapacity reflected in their results in Jul-2011. Interestingly, Finnair and Cimber are among the carriers reporting the strongest year-on-year gains in intra-Europe load factors. 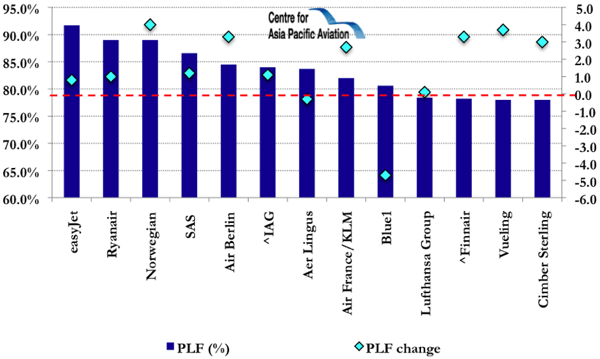 Source: Centre for Asia Pacific Aviation & company reports
^Finnair and IAG intra-Europe traffic only for Europe not including domestic

Passenger numbers up across the board

Intra-Europe passenger traffic growth was led by Vueling, which increased passenger numbers by 22.2% to 1.4 million. The LCC’s traffic figures continue to be bolstered by its take over of short-haul routes from Barcelona el Prat and Madrid Barajas from full-service parent Iberia (now reported in much-slower IAG results). This trend is set continue, with IAG stating that the “very competitive” conditions in southern Europe will see Iberia’s short-haul and feeder capacity continue to be shifted to Vueling.

Vueling said the Iberia agreement has been successful, “with good load factors and punctuality”. The agreement with Iberia, which was originally an experiment that would operate over the summer months, has been extended to 1Q2012, but will see a lower level of activity over the seasonally weaker winter months. According to Ascend, Vueling sub-leases 11 A320s from Iberia to operate some of the new routes from Madrid.

Norwegian also delivered a strong performance, maintaining its position as one of Europe’s fastest growing airlines. Norwegian continues to grow at breakneck pace and has been regularly reporting double-digit growth over the past two years. Passenger traffic growth is expected to continue into the summer, with the LCC adding capacity across its bases in Oslo, Copenhagen, Stockholm and Helsinki (its newest base).

Vueling and Norwegian continue to outpace their much-larger LCC rivals, Ryanair, easyJet and airberlin, in terms of growth rates, reflecting their smaller size and scope for growth. 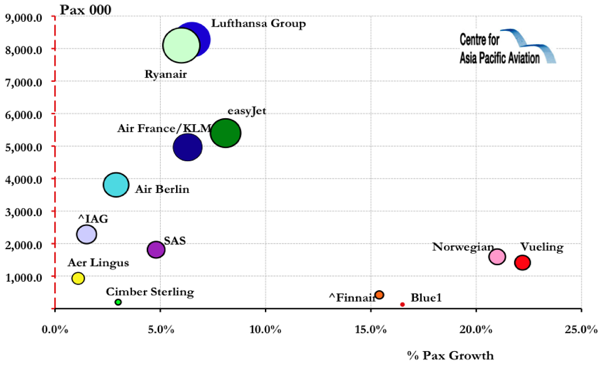 ^ Finnair and IAG intra-Europe traffic only for Europe not including domestic
Source: Centre for Asia Pacific Aviation & company reports