Shares in Aer Lingus were down 3.6% yesterday as the carrier urged all parties to redouble their efforts in one last attempt to reach agreement on the Transformation Plan programme.

The Transformation Plan is expected to reduce annual operating costs, excluding fuel, by EUR97 million before the end of 2011. The programme has been the subject of "intense negotiation" under the auspices of the Labour Relations Commission.

Aer Lingus CEO, Christoph Mueller, stated “we acknowledge that savings have been offered however it is critical that savings must be delivered in a full and meaningful way from 2010 and not deferred beyond the timeframe of the Plan”. Mr Mueller added, “this has not been the case so far. We remain committed to the negotiation process today to ensure that agreement can be achieved to urgently deliver the required savings in full”.

Finnair’s shares declined 1.6% yesterday, as the carrier agreed with its ground handling company, Northport, to a transfer of business to the Barona Group in terms of its baggage and apron services at Finland's Helsinki Vantaa Airport, as part of the carrier's structural development, as of 01-Dec-2009. As a result, around 490 employees currently working in these operations will transfer to the service of Barona under their present terms of employment.

Northport's customer service functions and Finnair Cargo Terminal Operations' activities other than warehouse operations will remain within the Finnair Group.

Northport staff staged a labour walkout at the airport on 30-Nov-2009 to protest the planned outsourcing, affecting Finnair services.

Finnair Deputy CEO, Lasse Heinonen, argued that “through the transfers of business, we can also better secure the future of personnel, because the new operators will offer employees more flexible and diverse work. We are seeking for more efficiency for our business. By creating solutions based on strategic partnerships, we can change our fixed costs into variable costs and focus on Finnair's core business”.

Meanwhile, shares in SAS fell 5.6%. The carrier reportedly plans to cut up 100 pilot positions after failing to reach an agreement with its pilots union. The job cuts are part of its cost reduction programme, "Core SAS", and are to be enforced "as soon as possible".

Elsewhere, British Airways gained 0.8%. The carrier in an agreement with the US Department of Transportation’s Aviation Enforcement Office, confirmed it will compensate consumers for cancellation penalties and other expenses incurred due to the carrier’s erroneous offer of USD40 fares between the US and India. The lowest US-India fare being offered by British Airways prior to the mistaken ad, not including taxes, was over USD750. 1,200 bookings, covering approximately 2,200 passengers, were made at the lower fare. 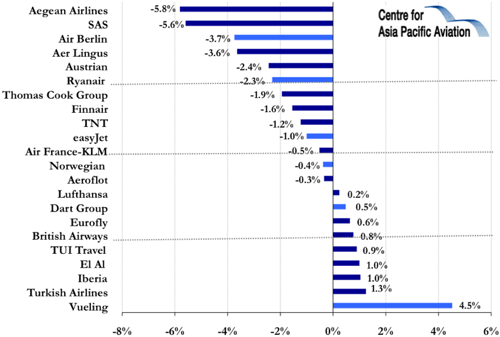