Despite strong historic and cultural ties, air service between much of Western Europe and South America remains spotty at best, with only 18 city pairs having more than 7 weekly flights. Seventeen more city pairs have a daily flight, and beyond that the seats and frequencies diminish — 24 out of the 69 nonstop links (35%) operate less than five times weekly.

At both ends of the routes, service originates or terminates at just a handful of airports, with Madrid overwhelmingly the European anchor. In South America, Brazil dominates, especially Sao Paulo. Of the 28 frequencies included in our parameters, 11 - roughly 40% - begin or end in Brazil.

Parameters to examine the most frequent service routes

The CAPA routes tool allows for the subdivision of South America into lower and upper halves. Since the combined total results in far fewer sectors than we have seen to Asia or North America, the figures are combined and analyzed together.

Cutoffs applied were 4000+ weekly seats to the lower and 3000+ the upper. Frequencies used were only for routes with more than daily service – i.e. greater than seven services.

There is also very little nonstop service to the western part of South America, which has only three daily nonstops to Europe, one from Santiago and two from Lima. 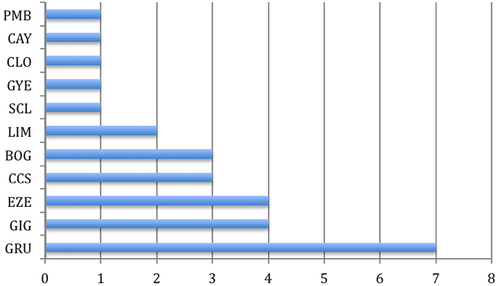 At the European end, over 30% of the flights touch Madrid. And unlike Asian and North American routes, London is relatively unimportant in the overall market. 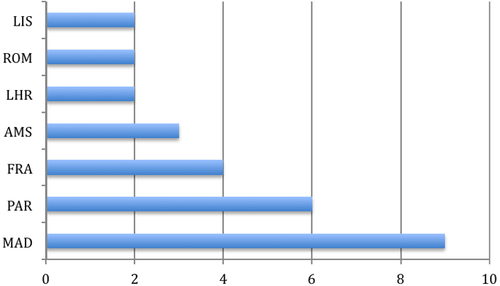 But Lisbon is far more important than set parameters reveal

Underrepresented according to the parameters set is Portugal’s TAP which operates nonstop flights from Lisbon to nine Brazilian cities with 68 weekly frequencies, as well as 4 each week from Porto to Rio and Sao Paulo—2 each. There are additional flights from both Lisbon and Porto to Caracas. All of this gives Portugal, and especially Lisbon, far greater importance than is displayed by our truncated lists.a

Far fewer frequencies than previously observed in other geographies

Despite the fact that Latin America continues to register steady growth, most of its sectors remain thinly served by standards set elsewhere. The top ranked route, Madrid-Buenos Aires has almost the same number of seats as Madrid-New York, a route that ranks 13th across the North Atlantic.

Decades of political and economic uncertainty have certainly contributed to the overall slow growth of these sectors and, with the exception of Brazil, long-haul European flights continue to be operated only to the capital cities. 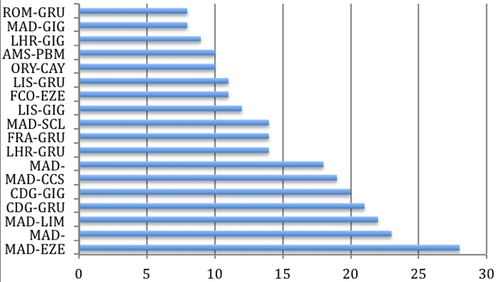 Following the demise of Varig, Brazilian carriers took a few years to sort out just who would become the intercontinental player, representing Brazil in foreign markets. Within the past few years, it is clear that TAM is that successor and over time it has rebuilt the Varig network, but in a very different way.

The chart shows Varig’s European destinations a decade ago. All of these points, with the exception of Copenhagen continue to have nonstop flights, with TAM now operating their own services to these traditional European gateways.

But TAM, unlike Varig, has separated Rio and Sao Paulo and has also eliminated the tag ends and circular routings often used by Varig. TAM operates nonstop services on a consistent schedule as opposed to the Varig “if it’s Tuesday, we must be in Copenhagen” operation.

Despite the return of a full-fledged Brazilian carrier to the South Atlantic, coupled with expansion at LAN and Avianca, European carriers continue to operate the largest percentage of seats between South America and Europe. Using our combined tables of the most prolific routes, the following 3 charts display the breakdown by European alliance hubs and origin of carrier, for the services on the list. The South American endpoint may, or may not belong to the same alliance—for instance Milan-Sao Paulo operated by TAM. 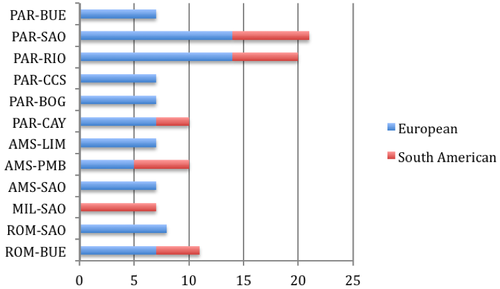 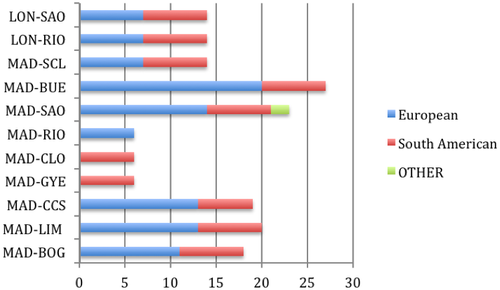 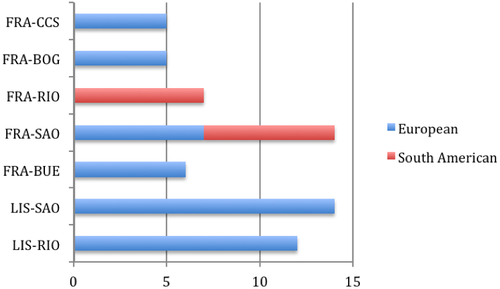 The charts show that European airlines operate far more flights than do their South American counterparts, and the Europe/South America services operated by Swiss and TAP only widen that gap.

And, given that every major European carrier is in, or bound for, an alliance, the pending possible shift in South America has huge consequence.

Alliance loyalties may change radically in the near future as the LAN/TAM merger moves closer to reality. Just in the past week another hurdle was passed when the Chilean regulators gave their blessing to the combination—with a few caveats. For the alliances, the most important stipulation was that the newly minted company had to align with only one global alliance, eliminating the possibility of maintaining the status quo. The final selection will have a tremendous effect on the alliance shares in the region. See related article: LAN-TAM alliance decision would give Star bigger benefits but oneworld favoured with more at stake 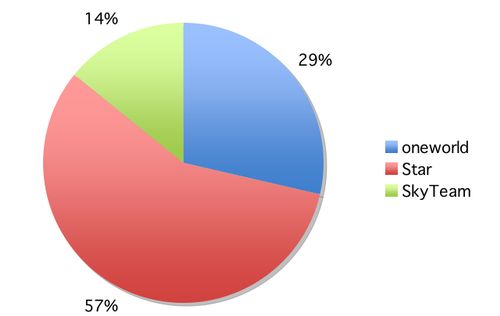 Though from Europe the chart shows Star with a distinct edge, once the third oneworld player, American Airlines and its comprehensive North American network is included, oneworld has a strong overall advantage in the region.

However, should oneworld prevail as the surviving alliance for the merged carrier, that group will dominate not only between North and South America, but also gains a strong and dominant lead on South Atlantic routes as well. 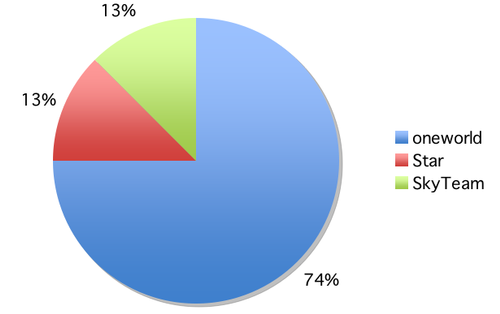 Star: the most to lose

In that scenario, Star’s hub-to-hub connections, based on current operations, would be limited to Frankfurt-Bogota and all of the other Star operators to Brazil would land in a market devoid of connecting feed. This is especially problematic for TAP with its multiple Brazilian gateways.

As reported in a previous article, a decision either way will greatly change the alliance presence on the continent and, in a way, affect the carrier choices of those who frequently travel to or from South America.

The winner will also benefit in years to come as the South American aviation market grows and routes expand. Unlike many pending industry changes, some of which take decades to unfold, the alliance selection will have immediate and visible market results.