The majority of European airline stocks moved upward yesterday, as the markets returned to full trade for the first time in the New Year with a strong start. The Paris CAC Index gained 1.78%, FTSE 100 rose 1.62%, while Frankfurt DAX was positive 1.31%.

SAS Group, which dipped 0.3% yesterday, signed an agreement with Allegiant Travel Company to sell 18 MD-80s to the American low cost carrier. Allegiant will pay for the aircraft with cash, with delivery to commence in Jan-2010 and continue over the first three quarters of 2010. This is the fifth aircraft transaction Allegiant has entered with SAS.

Once the deliveries to Allegiant Air are completed, SAS will have 24 MD80s remaining in fleet, of a total of 191 aircraft in the Group. The transaction will reduce the SAS Group's financial net debt by approximately EUR19.7 million. SkyWorks Leasing acted as SAS’ exclusive remarketing agent and advisor on both transactions.

Shares in Aeroflot were down slightly (-1.2%), Aegean Airlines and Finnair were weaker, down 1.7% and 1.9% respectively, while Austrian Airlines declined (-2.8%). 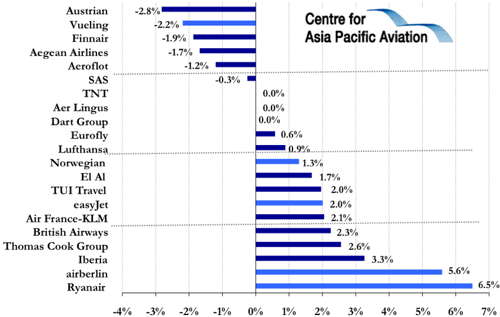