The European Parliament has agreed to suspend the “use it or lose it” airport slot allocation regulations, entitling carriers to the same series of slots during the Summer 2010 scheduling season as were allocated during Summer 2009, even if they use them less than 80% of the time in 2009.

The Association of European Airlines (AEA) applauded the decision, stating that airlines struggling to contain costs in the face of “free-falling” revenues, will welcome the opportunity to align more closely their seat production with the reduced demand. AEA Secretary General, Ulrich Schulte-Strathaus, stated, “having to permanently give up a slot is an extreme option which the airlines will avoid if they can, but flying nearly empty to protect slots is neither economically nor environmentally responsible… Right now, we cannot predict how long this current downturn will continue”.

Carriers hoping to take advantage of their weaker rivals, such as easyJet and Ryanair, were sold off yesterday, with their shares falling 4.9% and 7.4%, respectively.

Major airports were unhappy with the ruling. ACI-EUROPE stated it was “disappointed” with the decision, stating it would “harm European airports at a particularly critical time”, due to the negative impact it would have on commercial and aeronautical revenues. ACI-EUROPE explained it is concerned that the suspension will result in an “inefficient use of scarce capacity at congested airports and expose the travelling public and communities to late cancellations of air services in particular on regional routes. It will also create an artificial barrier to market access for new entrants”.

Finnair’s SVP Communications, Christer Haglund, stated, “through capacity cuts we have maintained load factors at a reasonable level. The problem, however, is an acceleration of the fall in average prices, resulting from a sharp reduction in business travel”. 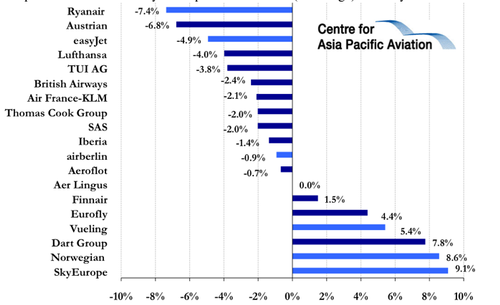