In an announcement that disappointed both parties, Aegean Airlines and Marfin Investment Group (Olympic Air), the European Commission denied their request to merge.

The plan, which was announced in February 2010, was designed to create a stronger presence for Greek carriers in the marketplace and to stave off possible ruinous competition, especially in the domestic sector.

Aegean as the surviving carrier and a Star Alliance member, also believed that a single domestic carrier could offer a more seamless product by offering a wider range of connections.

However, the European Commission said Wednesday a merger "would have led to higher fares for four out of six million Greek and European consumers travelling on routes to and from Athens each year."

The heads of both groups, Theodore Vassilakis from Aegean and Andreas Vgenopoulis from Marfin, were critical of the decision. While stating their intent to abide by the ruling, they also both felt that adequate consumer safeguards had been created and that, in the long run, the EU decision would hurt consumer interests.

Especially given Greece’s dire economic circumstances both carriers doubt the sustainability of two airlines in a relatively small market. In its most recent release, Aegean reported a loss for the first nine months of 2010. Domestic traffic has been especially hard hit by the economic crisis and declined by 15% over the period with a fall of 19% in the third quarter. While International passenger counts rose, the net result was a 3% overall traffic drop for the entire period which increased in the third quarter to minus 8%.

Olympic is part of the Marfin group’s portfolio and specifics are not publicly broken out for review.

However, looking at the current situation at Athens, the Greek carriers are significantly overpowered by competing airlines and, especially in international markets, it is difficult to see just how a combined Greek presence would damage competition.

The following charts depict the foreign carriers serving ATH and the A3/OA presence as competitors. The first chart covers the Gulf, Middle East and Central Asia.

It is immediately evident that the Greek carrier presence is minimal at best and that the vast majority of passengers arrive in Athens on foreign carriers. All three of the major Gulf carriers are active in the market and doubtless do well to Australia, home to a sizeable Greek expatriate community.

In Europe, the area of primary concern to the EU commission, Greek carriers have a larger but hardly overwhelming presence.

There are only two European destinations absent a competitive offer and 12 points to which neither Greek carrier flies. Aegean and Olympic overlap at only five European points and in each case, the foreign response is substantial. The net result is that in each market where there is overlap, the foreign carriers offer more service than either of the Greek airlines and the Greek offer is splintered in response to stronger home airline service.

Plenty of domestic monopolies at present

The domestic market is also fragmented with a significant number of destinations already having monopoly service. In addition to Aegean and Olympic, Athens Airways (ZF) was established in 2008 and operates on many of the trunk routes with three Embraer 145s and a single Bombardier Dash 8. GQ or Sky Express operates only a few flights with turboprop commuter aircraft and is not a factor in the market.

Absent specific load factors on domestic services, it is difficult to assess the profitability and performance of these services. According to Greece’s Aviation Authority, Salonika handled 859,063 domestic passengers in 2009 on 25,687 arrivals and departures. A quick bit of math yields about 33 passengers per flight – far below the capacity of the Airbus aircraft that dominate the route. Additionally, it is 185 air miles; a challenging stage length on which to make a profit. 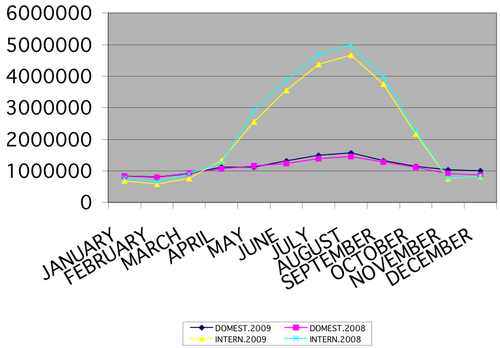 The chart above, also produced by the Authority and covering all operations at all airports, shows yet another problem faced by Greek operators, extraordinary seasonality. It also shows a drop in international visitors in 2009 as compared to 2008. Figures for 2010 are not yet available but the results reported by Aegean indicate that 2010 will show a further decline.

Finally, a look at the long-haul airlines servicing Athens, which are few and far between.

For the few services operated, Aegean’s Star affiliation complements Thai, Singapore and Continental. HT is Hellenic Imperial Airways, a company with a very chequered past, having twice in the recent past had its AOC suspended though still with aircraft and apparently the will to fly, if not the immediate wherewithall.

The European Commission spent 10 months examining the data and concluded that a merger of Aegean and Olympic would be anti-competitive. While the decision must be respected, the current economic situation in Greece, combined with an examination of the current competitive landscape, certainly appears at odds with the decision.

But there may be a second chapter. The joint press release ends with the following statement: “The companies will review the final document of the EC decision which was received today and following internal consideration and consultation with their advisers will decide for their possible further actions within the framework of existing legislation.”