Unlisted Etihad Airways announced (05-Aug-2010) plans to introduce its first "all-economy" aircraft to its fleet in Oct-2010. The two A320s will be configured with 162 economy-class seats (with 32-inch pitch), an increase of 42 from the current economy capacity.

The all-economy aircraft will operate to short-haul Etihad destinations, which have high demand for economy traffic and low demand for premium traffic. Initially these will be Alexandria, Calicut, Colombo, Damascus, Doha and Thiruvananthapuram. Plans are in place to expand the all-economy fleet to 10 A320 aircraft.

Wataniya Airlines, subsidiary of Kuwait National Airways, CEO George Cooper, stated many airlines in the Middle East region have an agenda that is not driven by providing returns to shareholders. Commenting on the privatisation of Kuwait Airways, Mr Cooper said: “I think it’s a very good thing because companies that are privatised and live fully exposed to the demands of shareholders tend to become more efficient and to develop in various ways. That can only be good for air transport in Kuwait and the wider region.” Mr Cooper also stated that Wataniya has "outsourced a lot of infrastructure", adding that this has allowed the carrier to "offer a premium product at a normal price". He added that the carrier is scheduled to take delivery of a seventh aircraft in 2010, with further route development likely.

Middle East shares were mainly stable on Friday (06-Aug-2010) with Jazeera steady while Royal Jordanian (+0.7%) shares were slightly up. 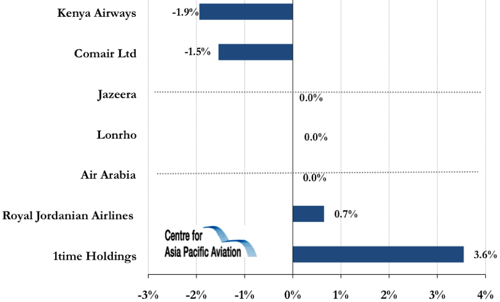