Etihad Airways looks certain to make 2011 a milestone year, carrying the positive momentum of 2010 into the new year. The carrier reported revenue over last year grew 29% year-on-year and continued growth in 2011 is expected to see it post a break-even result this year. Profits are forecast for 2012, a goal Eithad Airways has had its eye on for some time.

Break-even is now the carrier’s chief priority, although investment in routes and infrastructure are not going to take a backseat this year. 2010 was a “year to celebrate” said CEO James Hogan, but the carrier has no intention of taking anything for granted, given the depth of competition it faces from near neighbours as well as carriers in Europe and Asia Pacific.

Etihad Airways reported revenue of USD2951 million in 2010, up 29.2% from the USD2285 million in the previous year. The carrier has not disclosed a net profit or loss figure, but confirmed that earnings before interest, taxation, depreciation and amortisation (EBITDAR) was been positive for the full year, for the first time. Etihad consciously slowed growth in 2010, in order to concentrate on improving its bottom line.

Cost figures were not released by the airline, but Etihad stated that it has beaten its own cost reduction targets for the year. Eithad aimed to take USD250 million in expenses out of the business in 2010, a target it managed to better that target by USD70 million over the year. At the same time, the airline added nearly 800 staff, increasing is workforce to more than 6300.

Etihad launched services to Alexandria, Baghdad, Colombo, Erbil, Nagoya, Seoul and Tokyo in 2010. The addition of the long-haul destinations in the Asia Pacific has seen the region match Europe in terms of where Etihad is deploying its capacity. 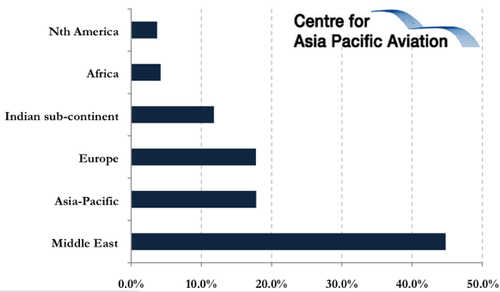 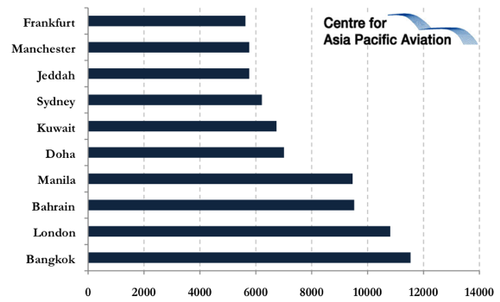 Cargo operations had a particularly strong recovery, as Etihad Crystal Cargo, the airline’s dedicated cargo unit, added two A330Fs to its fleet, increasing its total fleet to six aircraft. Cargo revenue increased 57.4%, although the carrier did not reveal a specific figure. Route development, as well as the addition of the dedicated freighters, also boosted cargo operations.

The year also saw the carrier introduce its first all-economy operations, with 162-seat A320s. The all-economy aircraft will initially operate to be Alexandria, Calicut, Colombo, Damascus, Doha and Thiruvananthapuram, but will be expanded to other short-haul destinations featuring high demand for economy traffic and low demand for premium traffic. Plans are in place to expand the all-economy fleet to ten A320s.

The single-class aircraft will also be used to develop the carrier’s network to new short haul-destinations that cannot justify premium seats at present, but have significant growth potential. Etihad is expected to use the service to expand operations into key point-to-point markets in Asia, the Middle East, North Africa and the Indian Subcontinent.

For 2011, Mr Hogan sees some encouraging market trends. The carrier managed to increase passenger numbers and yields despite a number of one-off incidents during the year, and is “seeing a growing confidence in many of our international markets, pointing to a strong performance in 2011”.

Mr Hogan has noted the return of premium travellers, particularly on its heavily travelled routes into Europe, Asia and Australia. The carrier’s forward bookings “look positive” said the CEO.

Etihad is also witnessing “particularly strong benefits from our Virgin Blue alliance”, although the agreement between the carriers has only just been put in place. The alliance between the airlines will see them cooperate on joint pricing and scheduling of services across their networks. It was given a tentative authorisation by the Australian Competition and Consumer Commission in mid-Dec-2010. The airlines will offer a joint network of more than 100 destinations, as well as integrating their frequent flyer programmes.

Etihad is determined to remain independent and free of the airline alliance system, but had built a strong web of codeshares and agreements with partners under Mr Hogan. Etihad Airways has 23 codeshare partners, offering more than 170 codeshare routes.

The carrier is due to add five new widebodies and a single narrowbody to its fleet, adding much needed capacity on long-haul routes. Two new destinations are also due to be announced for this year.

After 2011, the carrier’s fleet expansion will only accelerate, with more long-range B777s due to join the fleet in 2012/13, and A380 and B787 deliveries tentatively scheduled to commence in 2014. Etihad has pushed back its A380 order several times, given Airbus’ production problems with the type and its desire to wait until its business model and route network are “better suited to competitive commercial opportunities offered by this aircraft”. Etihad plans to increase its fleet to 109 aircraft by 2016 and 152 aircraft by 2020.

Etihad’s 2011 summer schedule targets destinations in the US, China and Europe, adding capacity into destinations such as Paris, Manchester, Geneva, Milan, Beijing and Chicago, as it aims to bring more of its routes to daily frequency.

According to Mr Hogan, 2011 will be “one of the most important” in the carrier’s short history, as it looks to add “depth and scale” to its operations. Etihad’s increasingly mature operations will drive its bottom line, although it will need strict discipline to keep its costs in check as it continues to expand its fleet and network.