Singapore Changi is poised to emerge as the Asian hub for Ethiopian Airlines as the African flag carrier looks to introduce non-stop flights on the Addis Ababa-Singapore route in 2015. The new flight could lead to a further strengthening of the Ethiopian Airlines-Singapore Airlines partnership, which already includes seven destinations in Australasia.

The launch of non-stop flights to Ethiopia would be the most significant accomplishment yet in Changi’s push to establish a foothold in the fast expanding Asia-Africa market. Local traffic between Singapore and Africa is very limited but Africa can potentially emerge as an important new source for transit passengers, unlocking new growth as Singapore’s traffic figures start to flatten.

Ethiopian Airlines has been contemplating serving Singapore non-stop and making Changi its hub for offline destinations in Asia-Pacific since it joined the Star Alliance in late 2011. A final sweetener could be Singapore’s newly introduced incentive for long-haul flights and transit passenger growth.

Ethiopian launched flights to Singapore in Dec-2013 by extending to Singapore some of its Addis-Ababa-Bangkok flights. Singapore is currently one of eight Ethiopian destinations in East Asia but has by far the least capacity – two weekly one-stop flights.

Ethiopian is the market leader between Africa and East Asia, with 31 weekly flights and about 18,500 seats based on OAG data for the week commencing 6-Oct-2014. Ethiopian accounts for nearly one-third of total non-stop seat capacity between the two regions.

When including the 10 weekly return sectors within Asia, Ethiopian has more than 22,000 seats in the East Asian market – more than any other African carrier. East Asia accounts for about 14% of Ethiopian’s total international seat capacity. 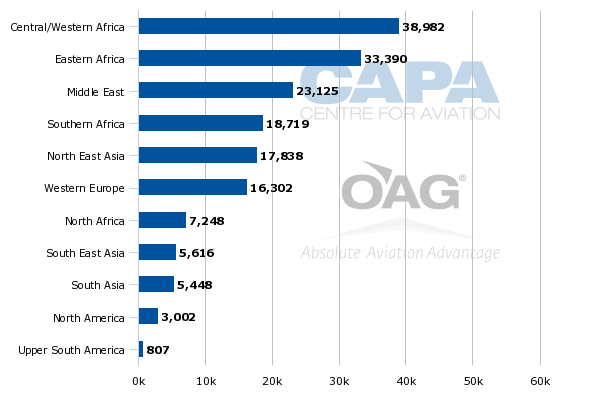 Addis Ababa-Singapore has not worked as a one-stop route

But the one-stop service to Singapore via Bangkok has struggled in its first 10 months.

Ethiopian’s performance on the route has, like many others, been impacted by the political instability in Thailand. Singapore was launched just as the civil unrest in Bangkok began. Ethiopian has fifth freedom pick-up rights between Singapore and Bangkok but Singaporean visitor numbers to Thailand have plummeted this year, hurting all carriers on the route.

The Addis Ababa-Singapore route can only be viable with connections to other cities Asia-Pacific which have more traffic to Africa. Ethiopian currently offers connections beyond Singapore to seven destinations in Australia and New Zealand – Adelaide, Brisbane, Melbourne, Perth, Sydney, Auckland and Christchurch.

The Australian destinations were added to its offline network as part of an expanded codeshare with Singapore Airlines that was implemented in Dec-2013 as Ethiopian entered the Singapore market. New Zealand was added subsequently.

But Ethiopian’s connections to Australasia via Singapore as well as interline connections to other points in Asia Pacific are generally not competitive because Singapore is not served non-stop from Addis Ababa. The current one-stop product means destinations served beyond Singapore require two stops and three stops when the passenger is originating in African cities other than Addis Ababa. (Three stops are most common as most passengers travelling on Ethiopian to Asia-Pacific are heading to or originating in other parts of Africa.)

Africa-Australasia connections via other Asian hubs such as Bangkok and Hong Kong are generally quicker as they require one less stop. For much of Africa travelling via Johannesburg and connecting to flights to Australia from South Africa is also a quicker option.

Providing a non-stop option will improve the connection times significantly and makes Singapore a more viable hub for Africa-Australasia traffic as well as Africa-Asia traffic.

There is little point in continuing with the one-stop flights. The sensible options would be to pull out of Singapore entirely and cover the market with an SIA codeshare or commit to non-stops.

Ethiopian recently filed with GDSs a new non-stop Addis Ababa-Singapore flight from the beginning of Apr-2015, indicating it has committed to serving Singapore non-stop.

The total flight time on the non-stop will be slightly over nine hours. This represents an improvement of about three and a half hours compared to the current one-stop flights.

787s will result in improved product

The non-stop flight to Singapore will operate three times per week with 787-8s. The current one-stop flight uses 767-300s.

The switch in aircraft type is important for the route to become successful because the 787 offers a significantly improved product in both the economy and business cabins. This will provide passengers connecting between Ethiopian and SIA, which has a renowned premium product, a more seamless experience.

Ethiopian’s decision to launch Singapore initially with a one-stop 767 product was a setback for Changi as Ethiopian originally indicated it would serve Singapore non-stop with 787s.

Ethiopian was likely inclined initially to operate one-stops to Singapore because it generally enters new Asian markets with a one-stop product. A tag from Bangkok was particularly appealing because the airline already had an aircraft sitting in Bangkok for about 10 hours.

Ethiopian initially served Guangzhou and Hong Kong via Bangkok while Beijing was served via New Delhi. Beijing and Guangzhou were upgraded to non-stop in 2011 as new 777-200LRs were delivered (Guangzhou was later up-gauged to 777-300ERs). The introduction of non-stop flights to Guangzhou freed up capacity for Bangkok-Kuala Lumpur, which was launched in 2012. Hong Kong non-stops were launched in 2013, freeing up capacity for Bangkok-Singapore.

Kuala Lumpur has been more successful than Singapore but it is a stronger longer market for African traffic compared to Singapore. Ethiopian also introduced a codeshare at the beginning of 2014 with Malaysia Airlines (MAS). But its relationship with SIA is much stronger as the MAS codeshare does not include flights beyond Kuala Lumpur or Addis Ababa.

Further expansion of Ethiopian-SIA codeshare will be needed

The SIA-Ethiopian partnership, however, still only covers a small fraction of the potential codeshare routes beyond Singapore and Addis Ababa. SIA says there are no immediate plans to expand its codeshare with Ethiopian. But an expansion will be necessary for the non-stop route to be viable.

Currently only Australia and New Zealand is offered as beyond points from Singapore. Ethiopian could potentially use SIA and its full-service regional subsidiary SilkAir to cover several destinations throughout Asia.

SIA in exchange could benefit from codesharing on more services beyond Addis Ababa. Currently SIA places its code on six Ethiopian-operated intra-African routes from Addis Ababa: Dar Es Salaam, Entebbe, Kigali, Mombasa, Nairobi and Pointe Noire. Ethiopian’s network has almost 60 African destinations, providing plenty of opportunities for SIA to grow its offline African network. Expansion of its offline African network and partnership with Ethiopian would fit in with its overall strategy to pursue stronger and more partnerships.

Johannesburg is served with daily with four weekly flights continuing onto Cape Town. SIA had a third online Africa destination until 30-Sep-2014, when it dropped service to Cairo via Dubai.

The Singapore Airlines partnership is integral to Ethiopian's new service

An expanded partnership with SIA is so important to the success of the operation that Ethiopian could postpone or cancel the launch of non-stops to Singapore if it is unable to forge a deal with SIA by Mar-2015.

Ethiopian could be better advised to drop any consideration of launching Ho Chi Minh and Manila on its own and instead look to serve these markets with a Singapore Airlines codeshare via Singapore.

Ethiopian also has been looking at serving Jakarta, another market it may be better off serving via Singapore Airlines. Jakarta is SIA’s biggest route and SIA and SilkAir also could provide access to several secondary destinations throughout Indonesia.

Ethiopian has long envisioned using Singapore as a hub. As CAPA pointed out in an analysis report from Dec-2011:

Singapore Changi is also keen to attract an East African carrier given the opportunities a Singapore-East Asia route could have in developing Singapore as a hub for broader Asia-Africa connections. Currently Changi only has one African carrier, Air Mauritius, and Singapore Airlines only serves one African country, South Africa, non-stop from Singapore (Cairo is served via Dubai). Rival hub Bangkok has been far more successful at developing African connections and has service from several African carriers including Ethiopian and Kenya Airways. While Ethiopian is also considering Kuala Lumpur, Singapore makes more sense as Singapore is a Star hub. Bangkok is also a Star hub but Ethiopian does not yet have a codeshare with Thai Airways.

Changi now has only one non-stop destination in all of Africa – Johannesburg. Africa has been a hole in Changi’s network that Singapore has been striving to resolve for some time.

Ethiopian and Air Mauritius (one weekly flight to Mauritius via Kuala Lumpur) are the only African carriers currently serving Changi. Rival Asian hubs Bangkok Suvarnabhumi and Hong Kong International are each served by five African carriers.

While there is limited local demand for services between Singapore and African destinations other than South Africa, new non-stop African routes including Addis Ababa can potentially work by leveraging the Changi hub. Changi will need to play an active role in making sure Ethiopian has the connections to make the planned non-stops service successful.

Ethiopian will also benefit from several incentive schemes Changi has launched in recent months in attempt to boost the airport's passenger figures, which were up by only 1% through the first eight months of 2014.

Ethiopian would also benefit from a 15% rebate in aerobridge fees and a 50% reduction parking fees that Changi is currently offering all carriers. The discount on parking is particularly beneficial as Ethiopian’s 787 will sit in Singapore for nearly 12 hours.

In addition Ethiopian should also be able to benefit from Changi’s newly implemented transit traffic incentive, which is offering airlines SGD10 (USD8) per incremental transit passenger carried over the 18 month period beginning 1-Oct-2014. As a majority of passengers on Ethiopian’s new non-stop flight will likely transfer from other flights Ethiopian stands to collect on this.

Even with the incentives Ethiopian will face challenges in making the Singapore route work. Most crucially Ethiopian will need competitive pro-rates on codeshare and interline connections. It will also have to work hard promoting and marketing the new connections.

With the right commercial strategies, Ethiopian, SIA and Changi should be able to attract sufficient traffic to make the route viable.

While the addition of Singapore will give Ethiopian seven non-stop destinations in East Asia (see background information below) there is significant and growing demand for Africa connections from other points throughout Asia-Pacific.

Changi and SIA will have to compete aggressively for this traffic or risk Ethiopian abandoning Singapore and shifting focus to a competing hub.

Narita is in line to become on 20-Dec-2014 Ethiopian’s sixth non-stop destination in East Asia while Singapore is now poised to become the seventh in 2015. Ethiopian currently operates non-stop flights to Bangkok, Beijing, Hong Kong, Guangzhou and Shanghai. Ethiopian plans to continue serving two other Asian destinations, Kuala Lumpur and Seoul, on a one-stop basis. 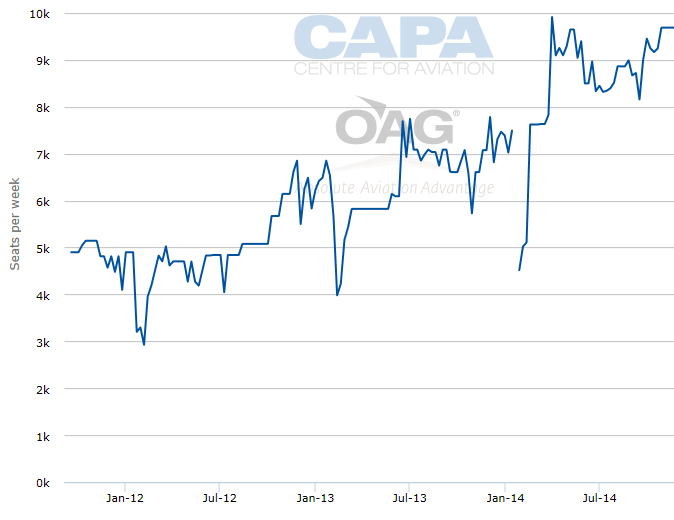