Ethiopian Airlines is one of the largest and most profitable carriers in Africa. It has 34 aircraft on order, including 10 B787-8s with a network of 56 international destinations and 17 codeshare partners.

It plans to join Star Alliance and in 2010 had an operating profit of ETB1.6 billion (USD92 million). Ethiopian has forged a successful path for its expansion plans and has come a long way since its beginnings as a joint venture between the Ethiopian Government and Trans World Airlines.

The carrier has set an ambitious, but realistic, 15-year strategic plan that includes becoming the single largest airline in Africa. It intends to generate revenues of ETB171 billion (USD10 billion) per year, acquire a fleet of 70 aircraft and improve its Skytrax customer service ranking from three to four stars.

If successful, the plan would make Ethiopian Airlines the largest and most profitable carrier in Africa.

The largest on-order fleet in Africa, both passenger and freighter

The African launch customer for the B787-8 made its order in 2006 and originally planned to have the aircraft in service by Jun-2010 on the Guangzhou route. However, like many of Boeing’s B787 customers, the Dreamliner delays have left Ethiopian behind on expansion plans. The carrier currently has 36 aircraft on order, the most of any African carrier.

In 2010, Ethiopian placed its largest order to date – 12 A350-900s, due for delivery between 2016 and 2019. The order was designed to give Boeing a wake-up call – implying that its long-time African operator was unhappy with the delays, and that it was prepared to look elsewhere for new aircraft. Despite the apparent threat, Ethiopian Airlines reaffirmed its Boeing order and is expecting its first B787-8 between 12-Mar-2012 and 15-Jun-2014, not Jan-2012 as originally thought. Ethiopian stated the new aircraft, both the B787-8s and the A350-900s, would be used to complement and replace its existing fleet, with the A350s to be deployed on services to the Far East and the Americas, and the B787-8s likely to replace B767s and B757s.

A strong point in Ethiopian Airlines’ portfolio is its substantial freight operation, with a dedicated cargo fleet of five aircraft and four B777-200LRFs on order. Cargo and freight services accounted for 17% of its total 2010 revenue. The carrier serves more than 40 destinations in its freight network through dedicated freighters and belly space on passenger aircraft. 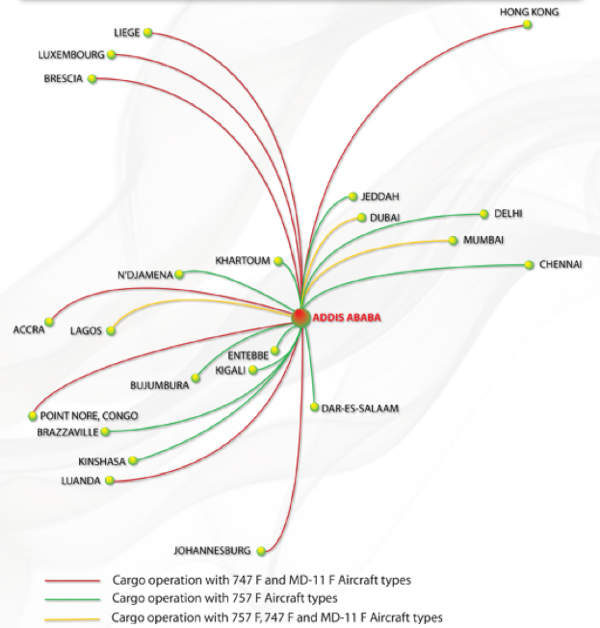 Ethiopia’s largest trade partners are the European Union, China, the US, Saudi Arabia and India. Ethiopian Airlines operates a dedicated cargo network to all those countries bar China and the US, although belly capacity, codeshare partners and sea links enable trade to these countries to remain strong. Ethiopia’s trade with other African countries is relatively weak, with Sudan, Tunisia and South Africa the only countries being a top 20 trading partner.

Ethiopian will give Star Alliance three main bases in Africa

Ethiopian is expected to join Star Alliance in mid Dec-2011. Ethiopian, mentored by Lufthansa, will join fellow African Star Alliance members South African Airways and EgyptAir, as the alliance extends its coverage to all but the west and centre of the continent. In the lead-up to the approval, Ethiopian Airlines established codeshare agreements with several key Star Alliance members, the latest being Singapore Airlines, and the most important being founding members SAS and Lufthansa.

Most seats in Africa are unaligned, Star next best

SkyTeam occupies a relatively strong presence in Africa through Air France-KLM and Kenya Airways. Air France and KLM have each built networks on the continent based around their longstanding colonial linkages. While leading Star member Lufthansa does not have the same historical ties as Air France and KLM, it does have fellow alliance members in the north, south and now the east of the country. Star made a point of recruiting strategic partners that spread across the continent, to complement the more than 50% of Star members that operate to Africa. 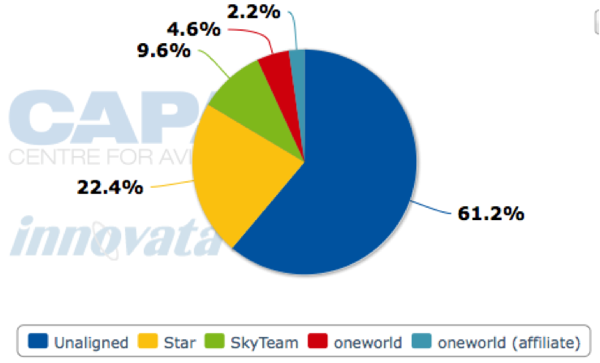 Within Star, EgyptAir provides a most challenging partner for Ethiopian Airlines. Both EgyptAir and Ethiopian serve a handful of destinations in the Asia Pacific including Beijing, Guangzhou, Bangkok and Mumbai, aiming to feed in traffic from the African continent. Star will benefit from Ethiopian’s African network as it is more established than the Egyptian flag carrier, particularly in West Africa, while EgyptAir is much stronger in North Africa. Each carrier serves points in the Middle East – Kuwait, Bahrain, Riyadh, Beirut, Tel Aviv, Jeddah, Sana’a and Muscat – creating considerable overlap in Star’s Middle Eastern network and, again, in their respective goals for feeding beyond traffic from Africa.

Limitations and benefits in Ethiopian’s network

A sub-region missing from Ethiopian’s network is northern Africa, where it offers service only to Cairo – already well covered by EgyptAir. Important gaps in its network include the oil- and iron-rich countries of Libya and Morocco in North Africa, each better covered by EgyptAir – which serves one destination each in Morocco, Tunisia, Algeria and two in Libya – with the natural advantage of serving multiple destinations within Egypt. But together Ethiopian and EgyptAir have Africa covered for Star.

Ethiopian was the first foreign airline to operate into China more than 30 years ago. At that time a political link, it has proven a valuable and longstanding connection into the Asian powerhouse. Times have changed however; though Ethiopian may have been safe from competition 30 years ago, this is no longer the case and Middle Eastern carriers are rapidly expanding alternative links between the region’s oil- and mineral-rich countries and China. Eight Middle Eastern carriers now operate between China and the Middle East including Emirates, Qatar Airways, Etihad, El Al, Mahan Airlines, Saudi Arabian Airlines, Yemen Airways and Iran Air. 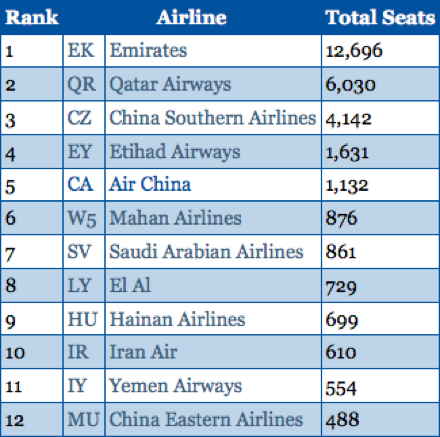 Only two airlines operate third and fourth freedom services between Eastern Africa and China – Ethiopian Airlines and Air Mauritius – offering approximately 9500 seats per week combined. Emirates, however, offers considerably more than 12,000 seats per week from Dubai to China, with numerous connections on to the Middle Kingdom, which is three times more than Ethiopian’s offering to China. Middle Eastern carriers provide a convenient, one-stop link between multiple points in both Africa and China that rivals the offering of many African carriers, with their multiple stops and limited capacity and frequency.

The Gulf airlines are also achieving major capacity share on routes to Europe. While a similar number of airlines operate Middle East-China and East Africa-China, the importance lies in the number of seats on offer. Emirates, the second largest carrier to operate between Africa and Europe, offers more than 88,000 seats per week, while Air France, the largest carrier to operate between Europe and East Africa, offers just 7,000.

Despite the competition coming from the northeast, Ethiopian Airlines’ most direct source of competition is found closer to home, by way of SkyTeam member Kenya Airways. Kenya’s flag carrier is another leading African carrier with aggressive expansion plans. The airline aims to serve “every African country by 2013” and is making steady progress towards that goal, including a rights issue scheduled for Nov-2011 designed to give the carrier a major cash injection. Kenya Airways’ operating profit surged in FY2011, up 73.9% from a dismal 2010 result, suggesting the carrier is back on track to achieve profitability. Kenya Airways is expected to report its 1H2011 financial results on 03-Nov-2011.

One significant factor that contributes to Ethiopian Airlines’ success is its major capacity share at Addis Ababa is due to the Ethiopian Government’s restrictions on foreign airline access. Ethiopian Airlines holds a near-monopoly on domestic routes, where it competes with just one other Ethiopian-registered carrier, Trans Nation Airways, which has one aircraft in service and none on order. 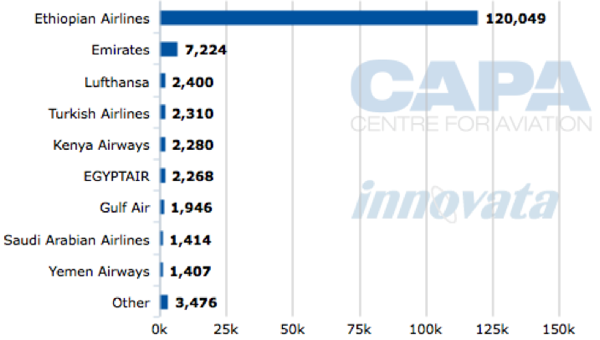 Ethiopia has proven one of the least LCC-friendly markets. Full service carriers account for no less than 99% of capacity at the airport, with flydubai the only LCC to operate into Ethiopia, operating a three-times weekly B737-800 service from Dubai. 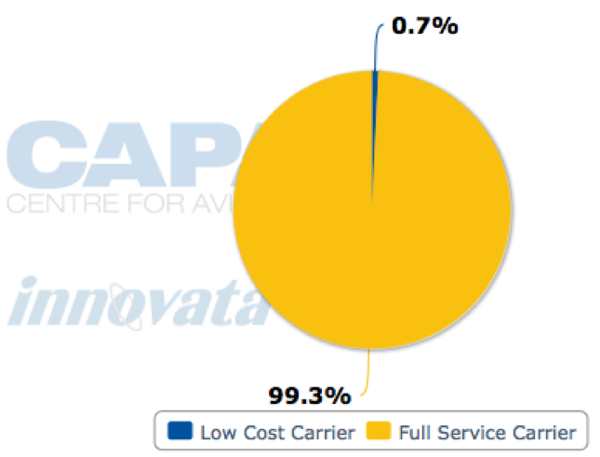 Protective policies do little to help Addis Ababa’s aspirations to become a large hub, so its future remains inextricably linked to the flag carrier’s growth plans. The result is, paradoxically, to make Ethiopian more exposed to competition from the Gulf carriers’ services into Ethiopia and other African ports. As long as Ethiopian shoulders all of the hub development, so the airport’s attraction limits the flag carrier’s potential to on-carry traffic from other airlines.

Outlook promising but expansion alone is not enough

Ethiopian Airlines has been consistently profitable over the past four years and is likely to see future profitability as its expansion plans are rolled out. Freight, although sensitive to market fluctuations, remains a strong point. Ethiopian has experienced considerable success with its network and sees it as a future revenue generator.

Liberalisation must surely spread across Africa, but Ethiopian – more than almost any other airline in the region – has the opportunity to restructure in time to meet the new challenges this brings. So long as it continues to expand rapidly, this revitalisation process will be made easier – provided it is addressed as a key priority. Expansion alone will not suffice. 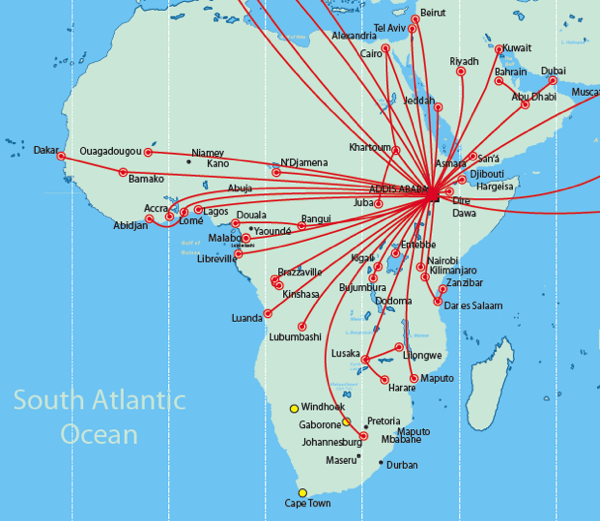 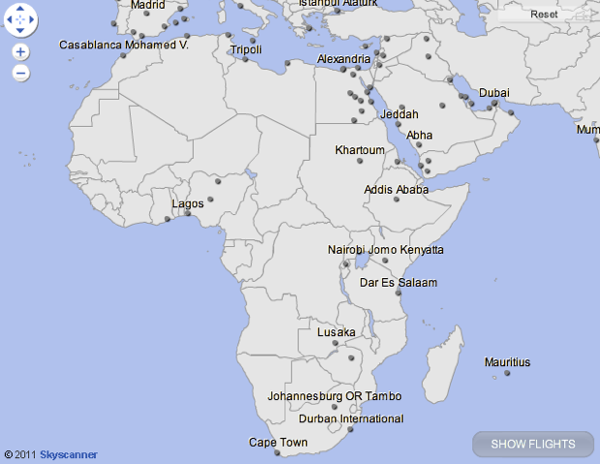