Worldwide passenger traffic grew significantly in May-2011 with total passenger numbers up by an encouraging 6.6% on a worldwide basis. However, freight declined slightly in the month, according to ACI. IATA has similarly noted the renewed expansion in May-2011 after a soft patch during the previous three months. IATA stated air travel volumes were 6.8% higher than in May-2010, and the level of the market in May-2011 was 4% up on the start of the year.

“We are encouraged by the continuing strong growth trend in passenger traffic. The decline in freight traffic is small in percentage terms and should be temporary as the corresponding period in 2010 represented the peak of the recovery. Most recent forecasts from the IMF predict robust GDP and trade volume growth in excess of 4%. Passenger and freight growth are expected to remain well above that figure for the remainder of 2011,” ACI World’s Economics Director Andreas Schimm commented. 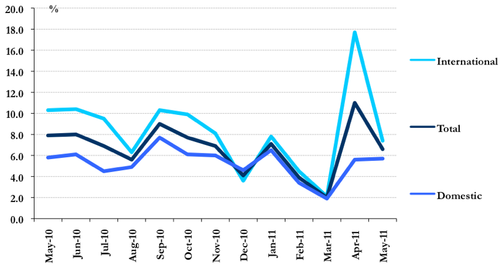 Passenger traffic during May-2011 was propelled by strong international demand across all regions with the exception of Africa (-16.5%), where key markets such as Egypt continue to feel the effect of uprisings in several North African countries, according to ACI World.

International traffic in the Asia Pacific expanded by 9.8%, a very positive result even against the background of continued declines at Japanese airports following the earthquake and tsunami in Mar-2011. IATA,  in its 30-Jun-2011 release of its May-2011 traffic, noted that Japan’s domestic recovery from the 11-Mar-0211 earthquake and tsunami could have started in May-2011, according to IATA, with a 4.4% month-to-month rise, although there is a long way to go with levels still down by almost 30% on a year-on-year basis.

Europe's passenger numbers increased by 8% as Turkey, Spain, Russia and northern European countries generated significant growth. IATA noted that European airlines, unusually, added capacity and passenger traffic at a faster rate than airlines from the Middle East in the month. 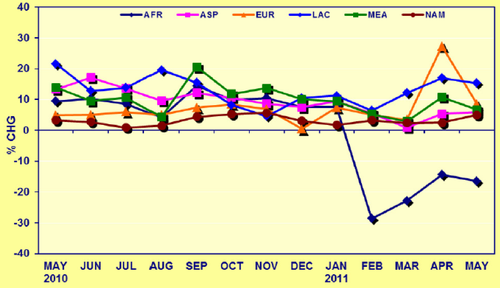 Latin America-Caribbean registered the fastest growth rate at 15.3% driven by very strong domestic demand in Brazil. Overall growth of 5.1% in North America was helped by a 7.8% expansion in international traffic. Results in the Middle East (+6.7%) were subdued by declining traffic in Bahrain. 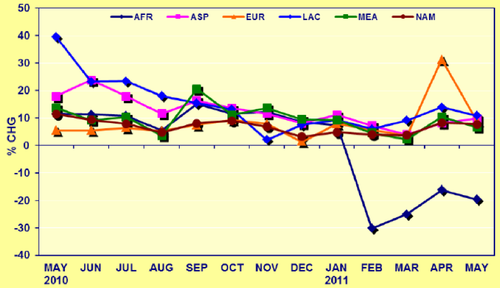 Air freight volumes declined slightly in May-2011, according to ACI, with international freight declining 2.5% and domestic freight down 0.4%. IATA noted that based on May-2011 traffic levels, freight traffic declined 4% against the post-recession peak of the restocking cycle in May-2010. However, recent months show a renewed upward trend following weakness over the past three months with freight volumes now 2% higher than at the start of 2011. 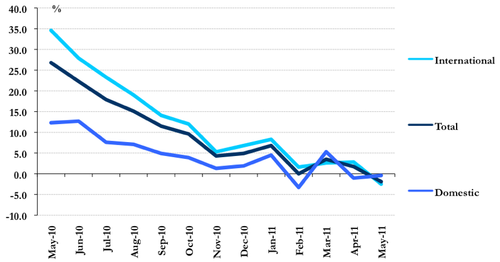 The Latin America-Caribbean region showed strong freight growth in May-2011, up 14.8%. Growth was driven by a surge in growth at Brazilian airports, with Sao Paulo up 33% and Rio up nearly 32%. Europe was the only other region in positive territory at 0.3%. The Asia Pacific region was down 5%, with Hong Kong, Taipei and Seoul Incheon all declining by double digits. 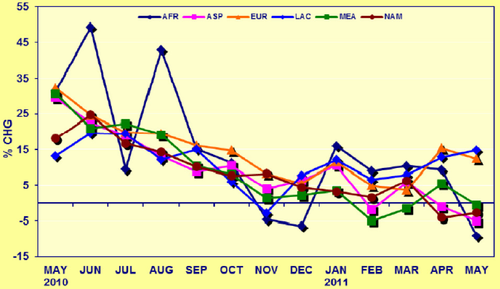 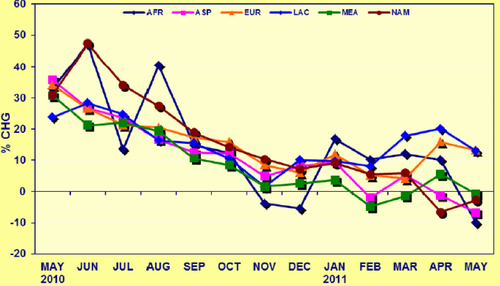 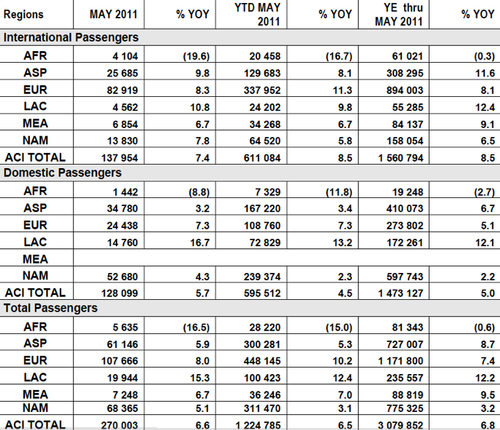 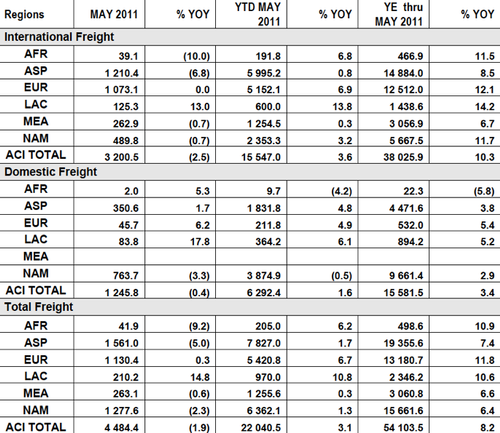