Embraer's shares rose 6.4% last Friday, after a 6.1% increase the previous day, as the Brazilian aircraft manufacturer’s results for 1H2009 beat earnings forecasts and it reaffirmed its full year guidance. Embraer’s shares finished the week up 8% overall, hitting a two-month high, but have underperformed Brazil’s Bovespa index for most of the year.

The manufacturer reported a 12.1% decline in revenue during the first half of the year, but also managed to slash costs by 11.8%, mostly due to job cuts and organisational restructuring. The result was a 13.2% fall in operating profit, to USD201.7 million. Net income plummeted to USD44.5 million, compared to USD219.3 million in 1H2008. The net result was mostly due to tax charges of more than USD100 million, a USD53 million loss on foreign exchange and significantly lower interest income.

Stronger second quarter results compensated for some weakness experienced during the first quarter, with Embraer reporting an operating profit of USD174.6 million from USD1,456.6 million in revenue, an operating margin of 12.0% (compared to 2.4% in 1Q2009). However, net profit tumbled from USD134.4 million to USD67.8 million, resulting in lower net margins for the quarter.

Commercial aviation typically accounts for two thirds to three quarters of Embraer’s revenue and order backlog. The manufacturer’s firm order backlog for commercial aircraft now stands at 340 aircraft, approximately four years at current production levels. The book value of the order book has stabilised, after dropping from USD21.6 billion to USD19.7 billion over the second half of 2008. 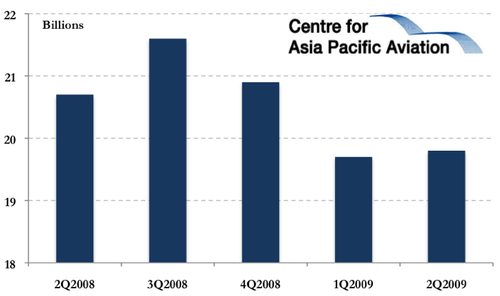 Embraer has not supported forecasts of an early bounce-back in the business aviation sector, although it too has noted some signs of recovery. The manufacturer is now estimating that business jet deliveries will not start to grow again until 2012, with the “difficult years” in 2010 and 2011 not helping its new light jet programmes.

The manufacturer plans to deliver 55-60 of its new Phenom 100 by the end of 3Q2009, but admitted recently that production challenges could see it miss the target of producing 110 of the aircraft over the first full year of manufacture. Embraer is confident of receiving certification and first delivery for the larger Phenom 300 by the end of the year.

Embraer CEO, Frederico Curado stated that the company was “comfortable about meeting our guidance this year”. Earlier in 2009, Embraer released a forecast of USD5.5 billion in revenue and 242 aircraft deliveries for the full year. 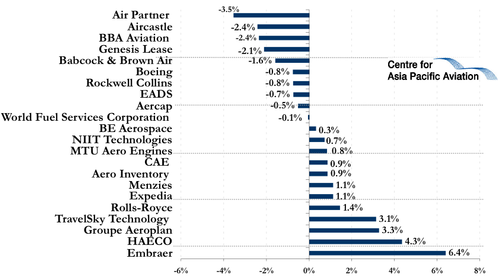