Embraer has confirmed it will continue to diversify its operations away from commercial aviation, and is aiming to raise the contributions of its defence and executive aviation segments this year.

Vice President of Embraer’s Executive Aviation Arm Luis Carlos Affonso has the ambitious target of increasing executive aviation’s contribution to revenue from 14-15% to 20-25%, which would equate to sales of between USD1.05 billion and USD1.31 billion this year. Embraer plans to double its share of total revenue in the global executive aviation market within five years.

Defence markets are also growing strongly. Since 2Q2009, the segment has increased its share of Embraer’s net sales, from 6.9% to 15.6% in 2Q2010. The company’s new KC-290 transport has attracted interest outside of Brazil. Production and development agreements or LoIs have been signed with Portugal, Colombia, Chile and the Czech Republic, while South Africa and Argentina have also expressed interest in the aircraft.

The new aircraft is not due to commence testing until 2014 or 2015, but Embraer is confident that there is a large market for the aircraft. The company plans to manufacture up to 180 KC-390s in the first 10 years of production. Potential demand could reach up to 700 aircraft.

Commercial aviation will continue to dominate Embraer’s operations, accounting for the majority of the company’s USD15.2 million order backlog, with 232 aircraft. The executive order backlog is approximately USD5 billion, down from USD7 billion during in 3Q2008. Embraer’s overall order backlog has fallen from a pre-recession peak of USD20.8 billion, but still accounts for three years of production.

The run down in the backlog is due to a combination of Embraer commencing full-scale production of its new Phenom 100 and Phenom 100 light business jets and the two-year decline in business jet sales. During the financial crisis, large numbers of executive aircraft were placed up for sale, with the number in the marketplace topping 1,000 in 1Q2009. Since then, it has decreased to approximately 850 aircraft.

Embraer expects total revenue of approximately USD5.25 billion in 2010. Its guidance for executive aviation revenues is currently USD1.1 billion, or just over 20%.

According to the Bombardier CEO, new orders are outpacing cancellations, with an 18-month backlog for large-cabin aircraft. The mid-size business jet market is below where Bombardier wants it, but order book activity is at “modest but encouraging levels".

In trading yesterday, Embraer went against the trend in aerospace markets, gaining 0.2%. 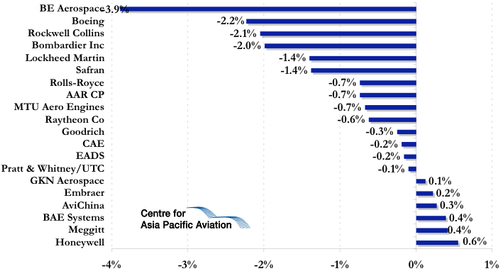 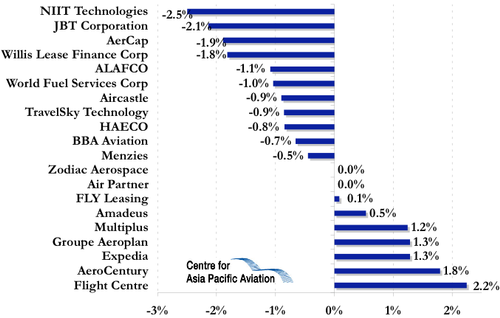