Embraer’s rollercoaster 2009 ended with the company managing to match most of the targets that it set itself for the year. After achieving record deliveries with 91 aircraft and net sales of USD1,609.6 million in the final quarter, the highest revenue quarter, Embraer’s gross margin for FY2009 was 20.4%, just 0.8% below FY2008’s margin. Total deliveries in the year were 244 aircraft, two more than initial guidance.

The financial crisis also caused some cancellations and delivery postponements in the executive sector. Net sales bested 2009 at USD896.3 million versus USD874.0 million. A decline in Legacy 600 deliveries (from 33 in 2008 to 18) was offset by the delivery of other types.

Embraer’s firm order backlog for commercial aircraft stands at 265 aircraft, roughly three years of production at projected rates. The value of the firm order backlog dropped to USD16.6 billion, down from the record USD20.9 billion at the end of 2008, and lower than the USD18.8 billion in 2007. Embraer received orders for only 23 aircraft at year end. The company sees positive signs for 2010, included upticks in airline industry performance.

The company’s operating income was USD335.6 million in 2009 compared to USD537 million in 2008 owing to an extraordinary event, without which the EBIT margin would have been 8%. It also pointed to the change in revenues between 2008 and 2009 as an indicator of company efficiency, noting a 13.3% decline, coupled with 20.6% in SG&A expense. Also reduced was R&D expense, down by 26.9% from 2008 or 28% from its guidance at a time when there were no cancellations or delays in product development.

The company ended the year with approximately USD503.3 million in cash and cash equivalents, a jump from 376.1 million in fiscal year 2008. Inventories were down by USD382 million in 4Q2009 resulting from adjustments on 2009/2010 production plans and increased production efficiencies which reduced inventory requirements. It also suffered a low volume of new orders compared to total deliveries in 2009, reducing advances from customers’ balance from USD1,600.7 million in 2008 to USD1,166.6 million at the end of 2009, which negatively impacted the company’s operating cash flow.

4Q2009 revenues grew by USD363.6 million versus 3Q09, owing to a large number of executive and defense deliveries as well as the continued fulfillment of defense contracts, concentrating some revenue recognition in the fourth quarter. Commercial aviation revenues declined, owing to a smaller number of jets delivered in the fourth quarter compared to the third quarter. Embraer indicated this provided better revenue diversification.

The company’s forecast for 2010 is for USD5 billion in net sales, including USD2.6 billion from commercial aviation, USD1.1 billion from executive aviation and USD650 million from defense. In addition, it expects to make another USD650 million on aeronautical services and other business.

Aircraft deliveries are expected to total 227 in 2010, including 90 in the commercial segment and 137 from the executive segment, where production of the new very light jets (VLJ) continues to ramp up.

“The global financial crisis that started in the last quarter of 2008, and basically continued through 2009, severely impacted global GDP and corporate results, which are the lead indicators for Commercial and Executive Aviation markets,” said the company.

“The 4Q2009, however, demonstrated signs that the world economy could be recovering. Passenger traffic is returning, after several months, to levels prior to crisis, and the availability of executive jets in the secondary market is consistently and slowly reducing, according to Jetnet data. In view of this scenario, Embraer expects an increase of orders in 2010, and the total number of orders shall surpass 2009.”

Embraer shares were up 4.7% on the results and better outlook. 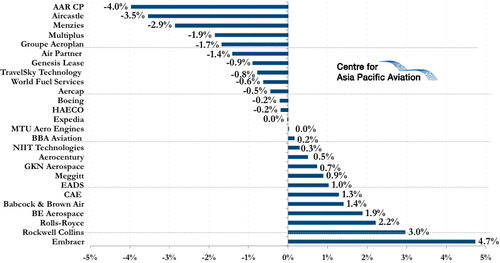