Shortly before celebrating its 10th anniversary of being listed on the New York Stock Exchange, Embraer President and CEO Frederico Curado, who rang the closing bell on Friday, reported the company posted a 22.1% gross margin in the third quarter compared to its 18.8% margin in 3Q2009.

Its net income for the quarter USD98.5 million with the net margin of 9.4%, doubling the net margin achieved in 3Q2009. During 3Q2010, the company earned USD57.7 million. The company cited strong financial results and an income tax benefit for the improved results.

Embraer delivered 44 aircraft in the quarter resulting in nine-month net sales for the period of USD1042.6 million, owing to increased productivity. Its firm order backlog remained stable at USD15.3 billion, resulting from increased orders in commercial aviation. It also reported a solid net cash position of USD623.8 million in 3Q2010, compared with USD658.7 million in 2Q10.

The company revised its full-year EBIT and EBIT margin guidance from USD340 million at 6.5% upward to USD380 million and 7.25%. It did the same for EBITDA numbers revising them from USD420 million and 8% to USD460 million and 8.75% EBITDA margin.

Embraer continued to benefit from non-commercial sectors such as executive aviation, aviation services and defence, which represented 19.3%, 12.4% and 7.1% of net sales, respectively. The commercial sector declined, however, from 66.1% in 3Q2009 to 57.8% in the current quarter owing to increased sales in executive aviation which is expected to continue throughout the rest of the year. Plans for 4Q2010 include delivering the majority of its annual production of Legacies as well as spooling up its Phenom 300 production.

“Market interest on Embraer jets are increasing as airlines improve their financial performance and search for more efficient aircraft to support growth in demand,” said Executive Vice President Airline Market Paulo Cesar de Souza e Silva. Commercial deliveries dropped to 20 from 29 last year owing to the recession. It delivered 70 commercial aircraft in the first nine months.  It’s commercial backlog totals 249 aircraft for its commercial products. Its total backlog amounts to USD15.3 billion at the end of 3Q-2010, or three-year’s worth of annual revenues.

Executive aviation delivered 24 jets this quarter compared with 27 in 3Q2010. The company noted that while deliveries may have dropped, total revenues rose on the changing mix of deliveries which included 16 Phenom 100s, six Phenom 300s and two Lineage 1000s, which debuted at the recent National Business Aircraft Association convention in Atlanta the week before last.

Embraer said 2010 continues as a year of slow recovery, despite the fact it rocked the NBAA when it announced a fleet order for NetJets of 50 Phenom 300s and 75 options. Such fleet orders are more familiar on the commercial side, not executive aviation. Embraer is maintaining its 2010 guidance for executive aviation of net revenues of USD1.1 billion based on its increased Phenom 300 production and initial deliveries of the Legacy 650. 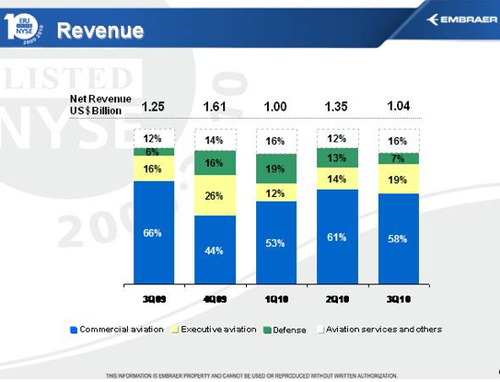 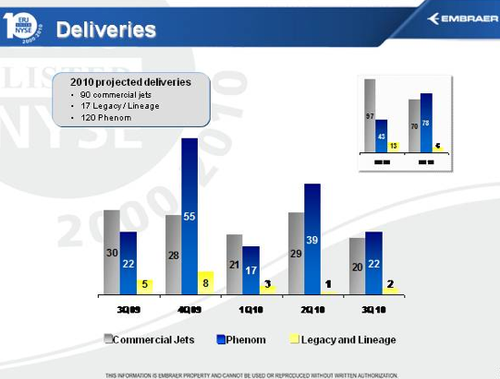 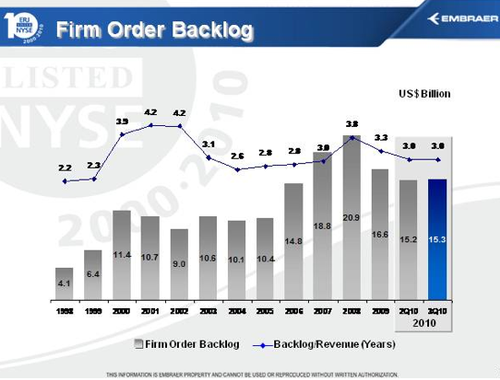 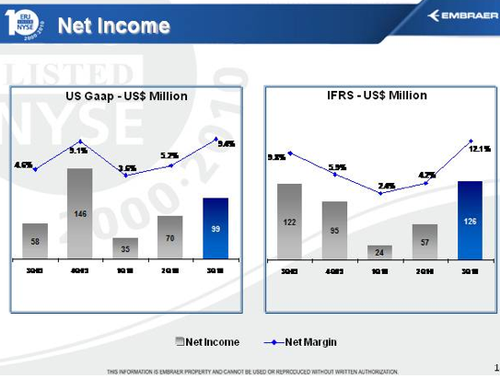 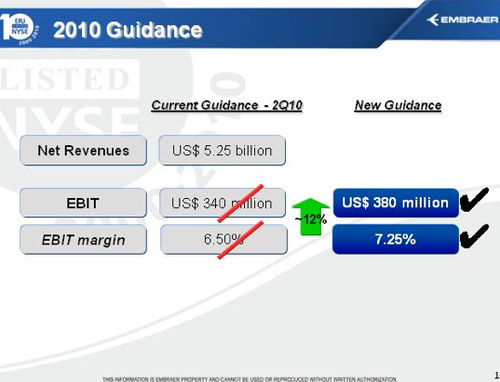 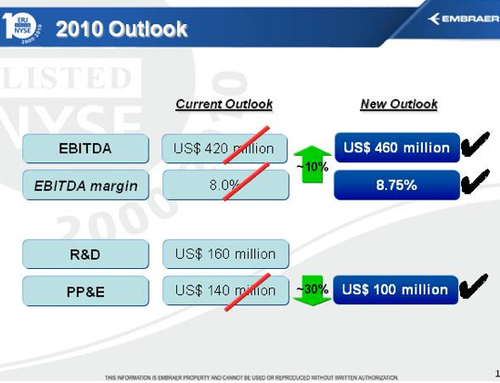