Embraer delivered 96 aircraft in 1H2009, 67 of them to commercial airlines, with deliveries led by its successful ‘E-jet” family. The Brazilian aircraft manufacturer’s order backlog is slowly running down in raw numbers (partially due to Hainan Airlines’ cancellation of 25 ERJ 145s in May), but it still represents better than two years of production at current output levels.

This stability is a good sign for the manufacturer, which has been preparing for the worst. At the beginning of 2009, Embraer announced it was slashing 4,300 jobs, approximately 20% of its 21,400 employees, and embracing the “new reality of demand for commercial and executive aircraft”. Commercial aircraft production was expected to fall by 15-20%, and Embraer cut its delivery target from 270 to 242 aircraft. Revenue was expected to fall by 10-15%.

Fast forward six months and Embraer is witnessing an easing of conditions, and is not suffering as badly as some other aircraft manufacturers. While its presence at the Paris Air Show was “minimal”, in keeping with its new cost cutting focus, the manufacturer still announced firm orders for another eight aircraft with KLM Cityhopper and a single E 175 for Fuji Dream Airlines. These add to the MoU for 20 E-190s signed with Austral Lineas Aereas earlier in the year, helpfully funded for the carrier through loans from the Brazilian state bank. However, a recent order for three E-190s from an Algerian carrier appear to has slipped from Embraer’s grasp.

Embraer is now delivering aircraft at a faster pace than last year, with 56 commercial and business jets deliveries in 2Q2009, compared to 40 aircraft in the same quarter last year. It is also reportedly looking to re-hire some of the workers it let go earlier in the year. Market confidence in the manufacturer seems to have waned somewhat over recent months. After hitting a seven month high in early May, its share price has lost 25% over the past few months, underperforming Brazil’s Bovespa index, which has lost about 12% since May.

Embraer’s shares were down 0.4% in trading yesterday. 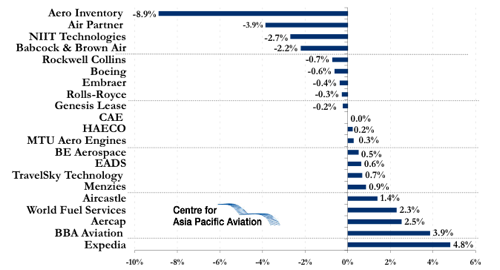