Brazil’s Embraer is expected to report a 7.1% fall in net income in 4Q2009, based on a Reuters survey of five analysts.

The manufacturer is expected to earn a net profit of USD104 million in the quarter, with its results brought down by one time charges related to currency levels, with the strengthening real, and the bankruptcy of the Mesa Air Group, which could impact results by as much as USD67 million, according to analysts.

Revenue is expected to drop 17%, although the manufacturer delivered 91 aircraft during the quarter. Full results are due to be announced on 18-Mar-2010.

Aircastle shares dropped 6.6% on Friday, with the company declaring a first quarter cash dividend on its common shares of USD0.10 per share. The stock had traded higher over most of last week, following a solid net result of USD102.5 million reported in early Mar-2010. Citigroup upgraded the stock from "Hold" to "Buy" last week. 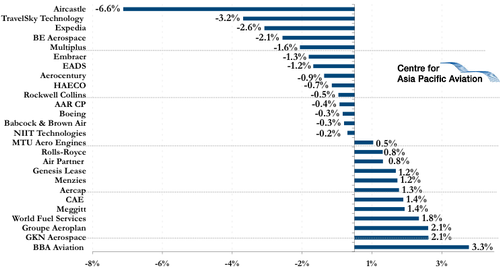