The majority of European carriers’ shares were down on Monday (12-Apr-2010), pushed lower by a 0.7% rise in oil prices, to USD84.34. Wider markets were flat, with banks the day’s biggest gainers, after euro zone finance ministers agreed to a EUR30 billion emergency aid fund for Greece, if it requests help. The mining sector meanwhile was one of the day’s biggest losers.

In the UK, the Leading Economic Index (LEI) increased by 0.6% in Feb-2010 to 100.6 (2004 = 100), following gains of 0.8% in Jan-2010 and 0.4% in Dec-2009, according to The Conference Board. Senior Economist for Europe, Jean-Claude Manini, stated “the pace of increase of the LEI for the United Kingdom has moderated but the deceleration of the index is less than that of the LEI for the Euro Area. The leading indicators suggest the British economy should continue to expand in the short term but as factors driving consumption are likely to remain weak, the recovery is unlikely to gather speed."

British Airways (-2.1%) was also down. CEO, Willie Walsh, has informed staff the carrier is waiting on the Unite cabin crew’s decision on its new pay and staffing level proposals. Talks between the carrier and union are progressing but Unite has not yet indicated whether it will accept the proposals. Cabin crew strikes in Mar-2010 reportedly cost the carrier up to GBP45 million. UK Civil Aviation Authority data indicates pay for British Airways cabin crew rose 5% in 2009 to an average of GBP31,400 p/a, including gross basic pay, overtime, flying bonuses and subsistence allowances.

Also during trading, BA appointed Paul Spencer, as Chairman of its pension trustees as part of efforts to resolve the carrier’s pension scheme deficit and smooth the merger with Iberia, which still has concerns over the level of BA's pension debt. British Airways and Iberia signed a merger agreement on 08-Apr-2010, after receiving approval from competition authorities and shareholders.

El Al (-3.9%) shares took the biggest fall on Monday. During trading, the Israel State Attorney's Office recommended that all court appeals of the Transportation Ministry decision to let El Al operate to Eilat be rejected. Arkia and Israir have sought to overturn the decision, while El Al is seeking to remove the conditions imposed by the Ministry.

Elsewhere, Cimber Sterling (+4.6%) continued to rise on the back of improved traffic results reported earlier in the week, while Eurofly (+2.5%) and Vueling (+1.3%) were also up. Italy’s FTSE MIB and Spain’s SMSI gained 0.8% and 0.7%, respectively. 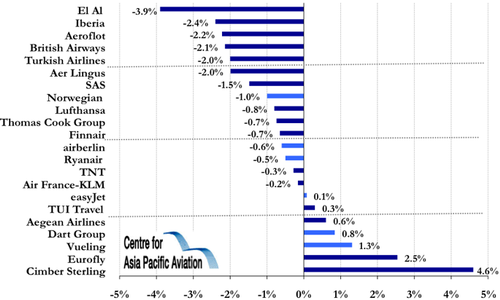