European airline shares moved higher on Wednesday (18-Aug-2010), after El Al and SAS reported improved financial results for 2Q2010 and oil prices (-0.5%) fell to USD75.42. The rise was despite falls in wider European markets, pushed lower by declines in the commodities sector, due to profit taking, as well as the mining sectors.

CEO and President, Elyezer Shkedy, attributed the performance to its “very focused commercial policy”, which he stated resulted in a 25% increase in revenue over the period to USD498.5 million. The carrier also ended the quarter with a 101% rise in operating cash flow to USD82.8 million.

SAS (+3.1%) also advanced after the carrier narrowed its losses for the three months ended 30-Jun-2010, to EUR53.1 million, compared with a net loss of EUR111.1 million in the previous corresponding period. CEO, Mats Jansson, stated that adjusted for the Apr-2010 ash cloud affects, the group generated a profit of EUR49.1 million for the period.

SAS also announced plans to reintroduce long-range aircraft at an unspecified date to boost frequencies to North America and Asia after experiencing record load factors on its long-haul services. The carrier will also increase services between major Scandinavian cities due to recovering demand.

Aegean Airlines (+0.9%) gained marginally, despite reporting a net loss of EUR32.6 million for the six months ended 30-Jun-2010, compared with a profit of EUR13.4 million in the previous corresponding period. This was the result of a 3.0% decline in revenue over the period to EUR267.4 million.

Managing Director, Dimitris Gerogiannis, stated the carrier must now focus on destinations where it “maintains a competitive advantage either due to our new Airbus A320 fleet or due to our entry into the Star Alliance”. The carrier is banking on the “possible imminent approval” of its merger agreement with Olympic Air, stating this will expand its profile in summer 2011, “which is necessary for both our company and our country”. 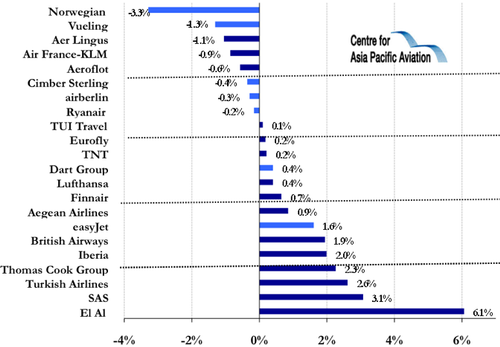