European stock markets edged higher Wednesday, although European LCC shares were generally weaker led by a 7.1% slump by easyJet - its largest fall in 18 months. The stock has advanced 14% this year, boosting the company’s market value to GBP1.73 billion.

The share price slump coincided with the release of the carrier’s financial results for the Jun-2010 quarter. New CEO, Carolyn McCall, made her first comments as CEO, stating she is “looking at all assumptions” concerning crew levels and rostering as staff shortages at bases, including London Gatwick, have resulted a decline in service punctuality.

Elsewhere in Europe, Vueling's shares slipped 2.9% after a 7.9% gain the previous day as the carrier announced a 350% year-on-year improvement in net profit, to EUR13.5 million, for 2Q2010. Revenues for the period rose 100%, to EUR211.1 million, leading to a 59% rise in EBIT, to EUR21.2 million. The carrier stated it achieved an EBIT of EUR75.8 million in the 12 months since its merger with clickair, four times the amount of the previous corresponding period.

Elsewhere, Ryanair and Air Berlin shares were both weaker, down 1.3% and 0.3% respectively. 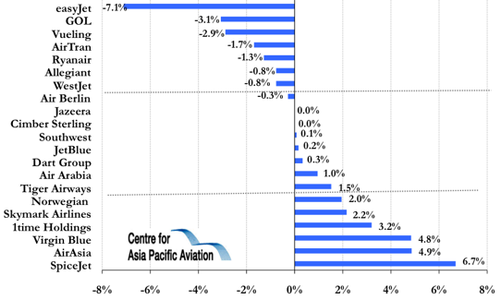