easyJet unveiled further details of its expansion plans for 2010, with the introduction of 36 new routes across Europe. The LCC’s shares were down 2.8% yesterday.

The expansion plans include the introduction of a fifth aircraft to be based at Manchester, which will operate a further three new routes from the European Spring to Mahon (Menorca), Sharm el Sheik and Zurich.

easyJet will also introduce new routes to its regional bases across the UK and will add Doncaster Sheffield Airport to the airline’s network with introduction of five new routes to Amsterdam, Barcelona, Faro, Palma (Majorca) and Prague.

In Australia, Virgin Blue’s shares were down 1.0% yesterday, despite the carrier and Delta Air Lines receiving Australia Competition and Consumer Commission (ACCC) authorisation for a proposed JV on trans-Pacific routes for five and a half years. US approval is still required. 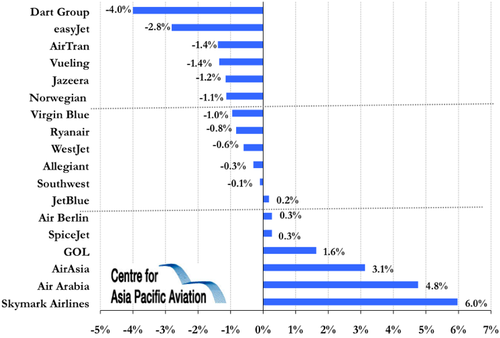