easyJet has updated its full-year profit before tax guidance to slightly above GBP150 million from a previous expectation of GBP100-150 million. Its shares soared 12% yesterday for the biggest one-day gain in at least 20 months.

The LCC stated total revenue per seat was up 6% year-on-year on a constant currency basis in the fourth quarter (up from a previously guided 3%), while losses related to the Icelandic volcano would be about GBP60 million, or GBP5 million less than previously forecast. Particular strength was noted on UK beach and city routes through the summer.

RBS raised its FY10 profit before tax estimate from GBP141 million to GBP154 million but noted it “still prefer[s] network carriers over low cost”, adding: “We think global trade flows can continue to support long haul premium and cargo flows, whilst we remain more cautious about the impact of European consumer confidence and aviation taxation on low-cost carrier yields next year."

easyJet’s Director of Operations, Cor Vrieswijk, has left the company and has been replaced by former procurement director Warwick Brady (former COO of India’s Air Deccan and CEO of Indonesia’s Mandala Airlines). The move follows a series of delayed flights and cancelled services at the budget airline over the summer. 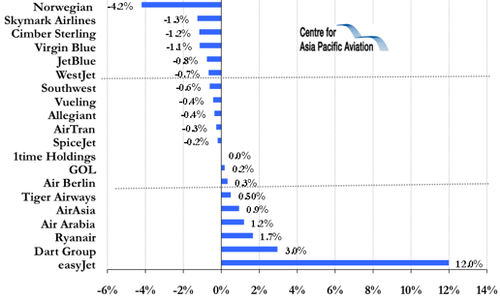